While Showtime's "Roadies" may not feature much in the way of music from the band it's about -- the Staton House Band -- that doesn't mean the show isn't filled with incredible music. In the first two episodes, The Head and the Heart and Reignwolf got a chance to shine in the spotlight.

That trend continues with the third episode of the series, "The Bryce Newman Letter," with special guest Lindsey Buckingham providing an incredible musical moment. Buckingham, vocalist and guitarist for Fleetwood Mac, performs an acoustic version of one of the band's biggest hits, "Bleed to Love Her."

In the Zap2it exclusive sneak peek above, it's clear to the characters on the show just how special it is to be treated to a private concert by the legend and it's something that is extended to everyone watching at home. Appreciate these moments while you can, this isn't the sort of thing you get from most music-based TV shows.

You can see Buckingham's full performance on the next episode of "Roadies" which airs Sunday, July 10 at 10 p.m. ET/PT on Showtime. 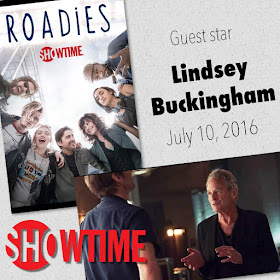 Look for Lindsey in the July 10th episode of "Roadies", the new Showtime series from Cameron Crowe.

The show airs every Sunday at 10pm ET/PT

More on the show