The peacemaker of Fleetwood Mac on Mirage, Maui and missing the buzz
by Ralph Moore
The Arts Desk 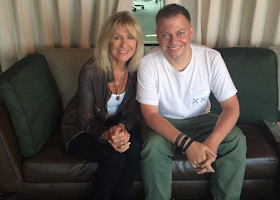 theartsdesk meets Christine McVie on a sunny Friday afternoon in September; the Warner Brothers boardroom (with generous hospitality spread) is suitably palatial. We’re the first media interview of the day, so she’s bright and attentive. McVie was always the member of Fleetwood Mac who you’d want to adopt: the most approachably human member of a band constantly at war with itself. Readily admitting that she’s the “peacekeeper’ in the band, the singer/songwriter behind such Mac classics as “Everywhere” and “You Make Loving Fun” is as sweet and serene as you’d hope she would be.


She’s here to promote the new deluxe remaster of 1982 album Mirage – the follow-up to the somewhat deranged 1979 Tusk, which was recorded and released as Christine and John McVie, the band's bassist, were divorcing. She quit the band in 1998 after the hugely successful live album The Dance, after which she started a fairly solitary life of her own in the English countryside for the best part of 16 years. The first four of those, she says, were simply spent working on the house. It was only therapy and the canny, persuasive hand of Mick Fleetwood that coaxed her into returning after a trip to Maui, Hawaii, where Mick lives close to John McVie, his lifelong partner-in-crime.

The former Christine Perfect had a severe fear of flying that she’s now completely beaten, and as we speak, it’s clear that she’s fairly perplexed about having left the fray for so long in the first place. So what was she doing in all that time exactly? “A lot of people ask me that question!” With a brand new album (their first since 2001’s Say You Will) and a new world tour in the planning stages, it’s clear that the Fleetwood Mac story still has several enthralling chapters ahead. Somewhere near Fleetwood's on Front Street – Mick's fancy restaurant in Maui – the drummer must be feeling pretty smug that the ragged band of brothers and sisters he founded are finally back together.

RALPH MOORE: What was the mood of the band post-Tusk?

CHRISTINE McVIE: I remember we did two huge world tours after Tusk. We drove ourselves into the ground physically, and obviously there was a lot of drinking and a lot of drugs, and that just about killed us all, so we took a lot of time off. There was a long time between Tusk and Mirage. Mick went to Ghana to make an album called The Visitor and Stevie [Nicks] made Bella Donna, which was a huge hit for her.

But I think maybe we were under contract so had to make a record at that time, so Mick tried to recreate a similar bubble to Rumours where we were away from our homes, and that’s how that started. The mood? I was quite looking forward to it. We recorded at Honky Château [the infamous Chateau d'Herouville, located 20 miles north of Paris in the Val d'Oise]. There was a big piano there that Elton John had left there, so that was great. I seem to remember we did a lot of mucking around, playing table tennis. The guys from the French Open came down to visit us and John McEnroe also came down – I think I actually beat him at table tennis one night! It was a funny time. I don’t remember any particular animosity. I'm sure we were under contract to do another record so that was the basis of it. And from that, from little acorns the oak tree grew and it turned into a much nicer experience with some really good songs on it.

You returned to the band in 2014: had the dynamic changed?

Well, I just couldn’t believe that 16 years had actually passed. I mean, quite literally, from the moment I stepped on stage in Dublin to rehearse “Don’t Stop” I knew: the eye contact with all the band members, it was like going home. Truthfully. And they felt the same about me. The circle was complete. Had anything changed? Only technically. Vibe wise, I had Mick looking at me through his cymbals, but there was always that gap there on the stage when I left – they hadn’t filled it up with anyone else. That gap when they were touring without me was there every night. It was such a great feeling.

Is it fair to say that you’re the peacekeeper in the band?

I know Stevie always calls me Mother Earth, so possibly! How do I put this…. I have always been the most sane one of the lot, more down to earth, but I think John’s probably even more down to earth now. Peacekeeper? Yeah, I like that title. I do tend to meander around in the cracks! And do I have to be a peacekeeper now? Only occasionally. You always get moments with Stevie and Lindsey [Buckingham], that’s part of their make-up – they are each other’s muses and they have not been together for years, but they have this love/hate thing that they’ll always have and someone has to gently insinuate in the middle.

But Stevie and I are really good friends, in fact I think we’re better friends now than we were 16 years ago. And it’s a fact, when it's the Buckingham/Nicks show backed by John and Mick, that’s going to cause a lot of tension and stress. But with me in there, it gave Stevie the chance to get her breath back and not have this constant thing going on with Lindsey: her sister was back.

Is it fair to say that Fleetwood Mac is a democracy, but driven for the most part by Mick?

Yes, but you’ve got to have a degree of flexibility. We’re very democratic. If one person is outvoted, you go with it. Mick always says, I’m a drummer, I can’t just sit in a room and play drums, I need a band. So in Maui, he has his own little band and when Fleetwood Mac’s not touring, he plays with them. It keeps him busy.

In the 16 years interim, what were you doing and did you see the band much?

I didn’t see them very much. First of all, I never flew anywhere. I saw them at Earl's Court a few years back and sat at the sound board and that was a weird feeling. But I had no sense at that time of wanting to rejoin and at that time it was a relief – but I didn’t realise what pleasure I was missing until more recent days when I made the phone call to Mick and asked, "What would be it be like if I came back?" Fortunately Stevie was dying for me to come back, as were the rest of the band. Lindsey didn’t believe it would ever happen, but when I walked back onstage he did and they were delirious.

But when I first left, I was married at that point and spent four years restoring the house, a big rambling place with gardens – it was quite a project. But I didn’t write very much and the marriage didn’t work out, and I started to find I was twiddling my thumbs in this huge place, bouncing off the walls. So I thought that I’d do a little solo project. I got together with my nephew who’s a good musician and quite handy with ProTools and I thought, I’ll do a little record because I can’t fly, and I don’t want to tour, so we did that in my garage. And that took a couple of years, because we didn’t have a pressing need to finish it.

And then I sunk into isolation and got in a bit of trouble and sought help, and that was when I called Mick. It was healing and cathartic going back into the band. I missed all that buzz. I was also deluded about some idea of being the country lady with dogs, a Range Rover and Hunter boots, going for long walks, all that. Baking cakes in my Aga. It was not what I wanted in the end.

How did you overcome the fear of flying?

I was starting to realise that I was trapped in England unless I went by train or boat – and that I will never be able to see the world. So I went to a therapist and said, "I have to be able to get on a plane." And he said, "Where would you most like to go?" And I said, "Maui!" And he said, "Buy a first-class ticket. Don’t get on – you have the ticket, that’s the starting point." And as serendipity would have it Mick said, “I am coming to London” and I said, “I have a ticket to Maui!” So he said “Stay there! And we’ll go back together.”

So I went back with Mick to Maui and didn’t even feel the plane taking off, that’s how unafraid I was. I had some pretty good therapy, and I love flying now! And I did some songs with his little band there, and that was the start of it all. It’s the best thing we could have ever done. In many ways, I think we sound better and the audience reaction is better than even it was before. It’s unprecedented in rock ‘n’ roll that someone should leave and rejoin 16 years on and all five of us are still alive and healthy – touch wood and whistle.

Let’s talk about the new album.

I love every single track we’ve done, bar none. This's something to me that is really special. Stevie hasn’t come in on it yet because she’s been busy doing something else. Last year, I was in there with Mick and Lindsey and John – John’s healing very nicely now – and nearly completed seven tracks and they’re magic. Seriously, no padding! I’m going to go over again in October to work on it. Stevie’s on tour but we’ve got until next year to finish it because we’re planning a world tour again, for the summer of '17. I don’t know if I’m privy to give song titles yet, but Lindsey and I have practically co-written everything. Getting the band all together is like herding sheep: to get all five of us in a room is nigh-on impossible. And then somebody will wander out. But it does happen.

And what’s great is Fleetwood Mac is now a genuine, cross-generational experience.

The generation gap is phenomenal! Kids are going, "We’d better see them before one of them dies!" The songs endure. I have lots of friends with growing children, even 12- and 11-year-olds and some of them are avid listeners, they carry Rumours on their iPods! Tango is a favourite and Tusk is a favourite of some the weird 14-year-old boys. The demographic is remarkable.

And you still have the potential to play Glastonbury again.

Yes. I think we have been asked but for whatever reason it hasn’t happened, I don’t know for what reason. Would I love to do it? Love’s a strong word! I wouldn’t mind – so long as we could helicopter in and helicopter out!

Let’s end by returning to Mirage – where does it sit in the Mac canon for you?

If I have to be really truthful, it’s not catalogued as my favourite but on it are some great songs and some really good memories and it harkens in a vague sense not to the soul of Rumours but to more commercial roots after Tusk, which was the antithesis of commercial. On Mirage we made an effort to have a few more catchy songs. But it’s still a pretty eccentric record when you listen to it. It’s nuts! 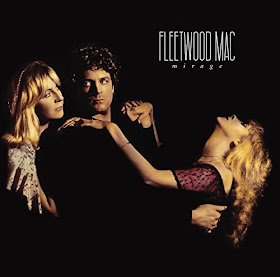