Stevie Nicks Talks About Empowering Women, Fleetwood Mac and her Next Tour 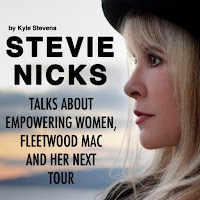 “I have a super loud voice,” Stevie Nicks said with a laugh. The world is thankful for it. Her voice is necessary in times like these. The future is up in the air and Stevie Nicks has stepped up to the plate to be the heroine we all need. She is taking the show on the road and it will be unlike anything anyone has ever seen before. The 27-city tour starts on October 25th in Phoenix and will travel to places like Atlanta, Toronto, Chicago, Philadelphia, New York City and more. “The 24 Karat Gold Tour” is the next chapter in the mythical career of Stevie Nicks.

In an exclusive interview with The Huffington Post, Nicks went into detail about what fans should look forward to when “The 24 Karat Gold Tour” comes to town.

One section of the interview I was really happy to read about are all the Herbert W. Worthington III Photos left behind when he died. I'm glad Stevie is now the owner of them. A lot of amazing shots were taken over the years.

"The guy who took the cover of Rumors, Fleetwood Mac and all of my covers, Herbert W. Worthington III, died last year and he left me everything. He left me every picture he ever took, all the way back to Jimi Hendrix, Buddy Guy and all the Fleetwood Mac stuff. All of the press photo sessions. I have an immense amount of amazing photographs taken by this great photographer who was a dear friend of mine that I can now use."