24 Karats of Gold Dust sparkled all over the Pepsi Center last night in an ode to the queen of Rock and Roll, Stevie Nicks. Nicks’ recent release of new recordings of old demos, or 24 Karat Gold: Songs from the Vault, sparked a hefty tour, landing her in the Mile High along with rockers the Pretenders. 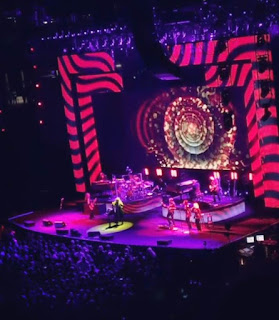 The show began promptly with the Pretenders, a solid act in their own right, front-woman Chrissie Hynde especially. Hynde sparked up the show, exposing her seasoned rocker ways while playing her rock jams like “Brass In Pocket” and slaying the hell out of the harmonica. After a little over an hour, the group waved good night and Martin Chambers, the band’s drummer, donated his shirt to the crowd. Even after all of these years, the Pretenders have kept their eccentric stage persona.

Just before nine o’clock, a figure draped in dark clothing and blonde curls pouring down the front of it could be seen walking onto the enormous stage. The microphone stand was decorated with a long, sparkling scarf. Next to the stand was a tambourine, also dressed in a long dazzling cloth. Nicks belted “All These Years” to open her set, with her full band joining on with keys, drums, piano, bass, guitar and back-up vocals. With her latest release being the re-visitation to many unreleased tracks from her many decades long career in writing music, Nicks explained to the eager crowd that this tour and this performance is not “the same Stevie Nicks that you are used to.”

Continue to the full Review at 303 Magazine.

Stevie Nicks and The Pretenders Rocked Tough and Tender at the Pepsi Center Last Night
by Tom Murphy
Westword.com


Tonight it was easy to forget that Chrissie Hynde of the Pretenders and Stevie Nicks are both senior citizens and that their greatest impact on popular culture happened in the first half of the 1980s when both ruled the airwaves. Go ahead, try to tell them that. Because last night, both stars rocked like the old days.

Sure, Nicks was then a member of one of the most popular rock bands of the era as a singer and songwriter in Fleetwood Mac but she also established herself as a solo artist of note beginning with her striking 1981 solo album Bella Donna. The Pretenders seemed to come from out of nowhere and were not really post-punk or New Wave despite Hynde's roots in England's punk world and the timing of the first Pretenders record, issued in 1980. Historical coincidences aside, Hynde and Nicks simply played the show like they were having fun with the music and rediscovering a newfound passion for the material.

What became obvious immediately during both sets is how Hynde and Nicks, both rightfully acknowledged for their powerful and arresting vocals, have unconventional and distinctive voices. Both are capable of a broad range of emotional expression and tonal range. Both have grit, and Hynde somehow manages to be tough and tender, while Nicks makes a virtue out of really selling the vocal lines with a forcefulness like she's amplifying and projecting her direct emotional experience. Both styles create a riveting tension and versatility of expression that is at the root of what makes their music so compelling.

Continue to the full review at Westword.com

It’s rare that someone takes the stage and you can actually feel the energy of the room shift, but Stevie Nicks had that force inside the Pepsi Center Thursday night.

The Phoenix-born rock goddess started her career more than 40 years ago, yet her passion for music was more commanding than ever. Nicks opened with “Gold and Braid,” a song originally intended for her “Bella Donna” album that never made the cut. The lively jam allowed Nicks to shimmy her shoulders and open up her infamous sandy vocals. Opening with the not-so-well-known song prepared her fans for a set-list of rarely-played treasures. But the whole night wasn’t just treasures. Those jonesing for the classic Nicks hits got exactly what they went for.

The Pepsi Center show was just the second night of her 24 Karat Gold Tour — the first in her hometown of Phoenix — so kinks were to be expected, but Stevie Nicks didn’t miss a beat. She jetted into “If Anyone Falls” and then with a couple twangs of the guitar, she brought the entire crowd to its feet with “Stop Draggin’ My Heart Around.” Standing in for the original duet’s Tom Petty was Chrissie Hynde, whose band The Pretenders opened the show. Their raspy vocals were perfectly in sync proving, as Nicks has been doing for years, that she doesn’t need a man to do anything.

Nicks’ lyrics are not only empowering, but her powerful delivery is what creates a space of vulnerability and connection for her fans. Her latest tour embraces women and highlights Nicks’ mastery of her craft. Her live version of “Bella Fleur” gave fans a taste of her vocal range and proved she still has the vocal chops we fell in love with in the ’70s. But there’s nothing quite like when she performed Fleetwood Mac songs.

Continue to the full review at the Denver Post


Setlist intact from the first night, which is cool! Reviews to follow

A few Periscopes captured some of the Denver show. Check out these clips thanks to Cara: