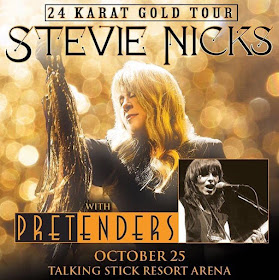 
Stevie Nicks kicks off her 24 Karat Gold Tour tonight in her hometown of Phoenix, Arizona, and she promises a show packed with music, not a lot of chatter.

"I'm not gonna do long talking things, where they might be going, 'Well, she could've actually done a whole song during this little talk here,'" Stevie tells ABC Radio. "It's gonna be fast and furious."

The set list will feature songs from Stevie's entire solo career as well as Fleetwood Mac hits, so everyone will go home happy.

"It's gonna be eclectic," she says. "I don't think anybody's gonna walk away going, like, 'Oh my God, she didn't do that Fleetwood Mac song that we wanted her to do.'"

She adds, "I'm not even gonna give people a minute to even start to ponder what's missing!"

And while she's giving fans a show, Stevie wants them to give her a show, too -- she's urging them to come dressed to the nines.

"I'm dressed-up up there, so I think it's a great thing to...say, ‘I give you all permission to totally pretend that you're going to a glorious cocktail party, and wear your most beautiful clothes,’" Stevie says.

"If you're a six-foot-five guy and you want to come in your white 'Edge of Seventeen' outfit, please do!'" she adds. "'Cause I just think it's hysterical, and I love it!"

Stevie's opening act is another legendary rock and roll chick, Chrissie Hynde, and her band the Pretenders -- which thrills Stevie to no end.

"When my manager said, 'What about The Pretenders?' I'm like, 'Would they even go with me?' And he said, 'I think they would!'" Stevie says. "I'm really excited about this, and I think, yes, we are bada** chicks, and it's really gonna be fun!"