What did we do to deserve Stevie Nicks?
by: KEATON BELL
Red Dirt Report 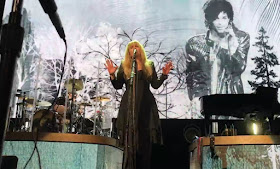 NORMAN, Okla. – For over 40 years, the Fleetwood Mac front-woman has managed to charm her way into the lives of anyone with two ears and a heart. Past the tales of cocaine binges and rock and roll excess lies an artist responsible for some of the most enduring music of the 20th century. How else do you explain the fact that in the year 2016, Stevie Nicks feels just as relevant today as she did when she released Bella Donna back in 1981?

Nicks has essentially raised her own coven of gold dust women, with acts such as Charli XCX, Haim, and Taylor Swift all openly citing her as a large influence. When she recently appeared on American Horror Story: Coven, you were just as excited as your parents were at the image of the 68-year old Nicks still kicking it, top hat and all. And would Florence + The Machine, with their mystical imagery and love-lorn lyrics, even exist today if it weren’t for the guiding influence of the original White Witch?

What it all boil’s down to is Nicks’ downright lovability. While her contemporaries focused on experimental sounds and forced musical intellectualism, Nicks has always been an unabashed softie. Her music is from the heart, often shamelessly emotional, and always sincere. You’re not just spinning a record when you put on Stevie Nicks, you’re listening to a woman bare her soul and asking you to do the same in return. That confessional style of music is universal, whether you’re young or old, male or female, a hopeless romantic or an eternal pessimist.

These attributes and more were all on display Sunday night when Nicks took the stage at the American Airlines Center as a part of her 24 Karat Gold Tour. I may have been just one of 20,000 adoring fans packed into the arena, but the intimacy and spirit Nicks performed with made you feel like it was a one-on-one experience.