Stevie Nicks enchants Lehigh Valley crowd with songs from the vault (PHOTOS)
by Matt Smith
Lehighvalleylive.com (Check out the photos) 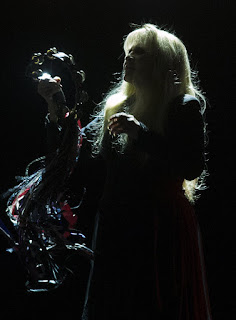 Singer-songwriter Stevie Nicks delighted fans with songs from deep within her catalog during a show Saturday at Sands Bethlehem Event Center in Bethlehem.

Best known for both her work with Fleetwood Mac as well as her highly-successful solo career, Nicks' 24 Karat Gold Tour included songs that either hadn't been performed in decades -- or ever.

The Pretenders, featuring Chrissie Hynde, opened the show and thrilled the crowd with familiar songs like "Message of Love" and "I'll Stand By You."

A highlight of the show came as Stevie Nicks was joined onstage by Hynde as the duo performed the 1981 hit "Stop Draggin' My Heart Around," with Hynde singing the parts originally performed by Tom Petty.

The next stop on the tour is Sunday night at the Wells Fargo Center in Philadelphia.
Nickslive at Monday, November 21, 2016
Share