Review - Stevie Nicks Live in Atlanta with The Pretenders Nov 6, 2016 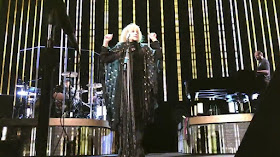 As women rock stars go, there aren’t many cooler than Stevie Nicks and Chrissie Hynde.

At 68 and 65, respectively, they look refreshed, focused and as if they want to keep making music for several more decades. They also sound robust, with any previously ragged edges to their voices smoothed by care.

This “24 Karat Gold” tour, which packed three-quarters of Philips Arena Sunday night, is Nicks’ solo ride, her (clearly joyful) diversion after spending three years on the road within the confines and endless compromises of Fleetwood Mac.

But by slotting Hynde and The Pretenders for an hour-long opening set, Nicks is also giving fans a whopping injection of female-fueled musical power.

Full review with photos at ajc.com