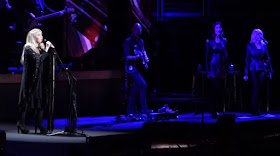 Asa Fleetwood Mac singer and solo artist, Stevie Nicks has no shortage of hits and fan favorites to play live -- but it's some of her favorite lesser-known songs that she's choosing to focus on her 24 Karat Gold Tour, which stopped in Philadelphia's Wells Fargo Center Sunday night.

Though Nicks probably doesn't need an opening act -- in fact, Fleetwood Mac doesn't have one for their tours--she tapped The Pretenders to get things started, who played an exciting rock set peppered with some classics of their own, such as "Back on the Chain Gang," "I'll Stand by You," "Don't Get Me Wrong," and of course "Brass in Pocket." Frontwoman Chrissie Hynde, despite joking about her age, still sounds fantastic, easily singing and playing hits that are now decades old.

Nicks and her eight-piece band opened her own set with "Gold and Braid" and continued for about two hours with songs spanning her career, from the beginning with Buckingham Nicks to Fleetwood Mac to solo. Hynde returned to the stage early in the evening to join Nicks for "Stop Draggin' My Heart Around," originally performed with Tom Petty & the Heartbreakers, before Nicks continued on not with hits, for the most part, but with tracks pulled out of what she calls her "Gothic trunk" and featured on 24 Karat Gold: Songs From The Vault, often taking the time to tell the personal stories behind the writing and recording. Despite being in a packed arena, Nicks' personality and willingness go behind the scenes made one feel as though they could easily be in a smaller venue at a more intimate show. She shared stories of what inspired songs like "New Orleans" and "Moonlight (A Vampire's Dream)," as well as tales of interactions with other musical heavyweights like Petty, Don Henley, and Prince, whose picture was often displayed on the large screen behind Nicks.

Despite the focus on songs that are among her favorites but might not be known to a wide audience, Nicks didn't avoid guaranteed crowd pleasers--Fleetwood Mac song "Gypsy" made an early appearance, followed by "Gold Dust Woman" at the end of the set, complete with a gold shawl and Stevie's dancing. The band's music was featured a final time during the encore with "Rhiannon." As for Nicks' most famous solo songs, she ended her set with the hit "Edge of Seventeen" and ended her encore with the lovely "Leather and Lace."

Nicks' solo shows may not pack the intensity of Fleetwood Mac's, but that's also part of the charm--Nicks is still an iconic singer and songwriter in her own right, and the 24 Karat Gold Tour gives fans a chance to see a different side of her.