Stevie Nicks and the Pretenders — odd but cozy bedfellows at WFC 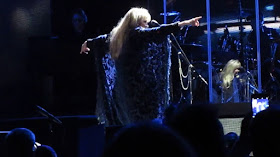 If we were to duck back to their post-punk '70s peak, the Pretenders and Stevie Nicks would not have been pals. Witchy, willowy pop-hitmaker Nicks — with Fleetwood Mac or through a long solo career — was the polar opposite of the blunt, smug Pretenders and smugger-still front woman, Chrissie Hynde.

Nicks was all leather and lace, a prettily warbling product of bright Californian pop-rock, but with a mystical edge. Hynde was beat-up leather and black-denim neo-punk, but with a rich burr and an adoration of melodic ’60s pop, along with a cynical lyricism that made her just as much an acolyte of Dusty Springfield as she was of Johnny Rotten.

Time and trend passed, people got older, and now Hynde, with an ever-shifting cast of Pretenders, is on a tour with Nicks that on Sunday packed the Wells Fargo Center. The two even got together — happily and heartily — on a blowsy cover of Nicks’ 1981 downturned romancer with Tom Petty, “Stop Draggin’ My Heart Around,” with Hynde and rangy guitarist Waddy Wachtel. (Longtime associate Wachtel was as much a secret weapon Sunday to Nicks’ scratchy purr as the Pretenders’ aggressive, rumbling drummer, Martin Chambers, was to Hynde’s winnowing coo.)

Aside from that aforementioned 1981 hit and F-Mac smashes such as “Gypsy,” Nicks’ set fascinatingly focused on catalog riches (“my Gothic trunk of treasures”) that had  fallen through the cracks — an idea that legacy rockers with tired set-lists should consider.

Along with an ardent take on the way-early “Crying in the Night” (a Buckingham Nicks cut), moody synth-rockers “Stand Back,” and “If Anyone Falls,” the incrementally building theatrical ballad “Moonlight (A Vampire’s Dream),” and the train-chugging-whistle-blowing “Enchanted” all allowed Nicks’ scuffed, coolly soulful murmur freest range.

Chatting up the (sometimes romantic) history of each track, Nicks became almost Judy Garlandlike — but without the tragic end.

Hynde’s Pretenders also did something bold in opening their long set with two rough, Stoogeslike ragers from the new album Alone — the explicit title track and the rumbling “Gotta Wait.” Another new track — the oddly plucky “Holy Commotion” — also was part of the live package.

Pluck and cheer are what Hynde best displayed while using her rock-salted caramel hoot of a voice, whether it was smiling/smirking through a boldly crunching “Message of Love,” growling through the reggae-punkish “Private Lives,” or slinking along in “My City Was Gone.”

Hynde also made fun of her cutoff Elvis T-shirt during the “style” section of “Brass in Pocket,” and of her age, 65, and her crowd's. “There’s a lot of old faces here, but you guys are pushing it,” she said, laughing. “Me, too.”