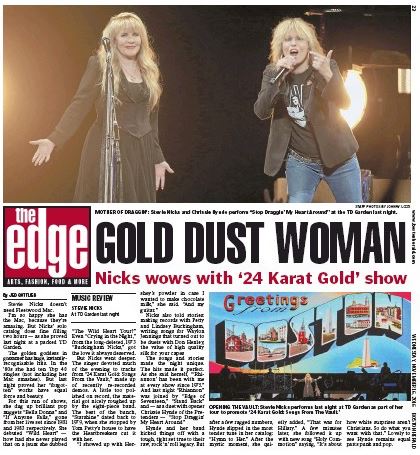 I’m so happy she has the Mac, because they’re amazing. But Nicks’ solo catalog does fine filling two hours — as she proved last night at a packed TD Garden.

The golden goddess in gossamer has huge, instantly-recognizable hits. In the ’80s she had ten Top 40 singles (not including her Mac smashes). But last night proved her “forgotten” works have equal force and beauty.

For this run of shows, she dug up brilliant pop nuggets “Bella Donna” and “If Anyone Falls,” gone from her live set since 1981 and 1983 respectively. She debuted “Wild Heart” — how had she never played that on a jaunt she dubbed “The Wild Heart Tour?” Even “Crying in the Night,” from the long-deleted, 1973 “Buckingham Nicks,” got the love it always deserved.

But Nicks went deeper. The singer devoted much of the evening to tracks from “24 Karat Gold: Songs From the Vault,” made up of recently re-recorded demos. A little too polished on record, the material got nicely roughed up by the eight-piece band. The best of the bunch, “Starshine” dated back to 1979, when she stopped by Tom Petty’s house to have the Heartbreakers cut it with her.

“I showed up with Hershey’s powder in case I wanted to make chocolate milk,” she said. “And my guitar.”

Nicks also told stories: making records with Petty and Lindsey Buckingham, writing songs for Waylon Jennings that turned out to be duets with Don Henley, the value of high quality silk for your capes

The songs and stories made the night unique. The hits made it perfect. As she said herself, “‘Rhiannon’ has been with me at every show since 1975.” And last night “Rhiannon” was joined by “Edge of Seventeen,” “Stand Back” and — as a duet with opener Chrissie Hynde of the Pretenders — “Stop Draggin’ My Heart Around”

Hynde and her band kicked things off with a tough, tight set true to their raw, rock ‘n’ roll legacy. But after a few ragged numbers, Hynde slipped in the most tender tune in her catalog: “Hymn to Her.” After the mystic moment, she quietly added, “That was for Hillary.” A few minutes later, she followed it up with new song “Holy Commotion” saying, “It’s about how white surprises aren’t Christians. So do what you want with that.” Lovely to see Hynde remains equal parts punk and pop.


Stevie Nicks’s current tour is called the 24 Karat Gold Tour, a reference to the vault of songs that the Los Angeles-based artist has amassed over her career as a singer, songwriter, and muse. The vault’s full name? “The Gothic Trunk of 24 Karat Gold Songs” — an appellation that sums up her legacy’s many riches, among them the mega-selling albums she recorded with her band Fleetwood Mac, her indelible solo hits, her collaborations with the likes of Tom Petty and Don Henley, and her penchant for flowy outfits.

Nicks’s first two solo albums, 1981’s “Bella Donna” and 1983’s “The Wild Heart,” were reissued earlier this month. To look back on them now is to remember how blockbuster they were, spawning sinewy, catchy singles that ruled the then-nascent MTV and allowing Nicks’s singular take on American gothic — a swirl of black lace, sweeping capes, and blonde hair — to captivate a broadcast audience. Tuesday night’s exuberant show focused on those two albums while also looking backward and forward at her decades-spanning body of work.

The band, led by her longtime music director Waddy Wachtel, muscled through the set, adding heft to Fleetwood Mac chestnuts like “Gold Dust Woman” and “Rhiannon” and fleshing out the taut “Stand Back” with a guitar solo worthy of its inspiration, Prince. (A photo of the late polymath performing with Nicks appeared on the video backdrop at the song’s conclusion, and images of him also floated onscreen during “Edge of Seventeen.”) Chrissie Hynde of the Pretenders, the proto-Britpop outfit who powered through an hourlong set before Nicks took the stage, helped fill in for Tom Petty on a particularly boisterous version of “Stop Draggin’ My Heart Around.”

Between songs, Nicks offered up a slew of origin stories — workshopping “Leather and Lace” with her then-boyfriend Henley, who would later duet with her on the recorded version; the tour-occasioned breakups that inspired the recently unearthed “Belle Fleur.” (”That’s kind of the story of how relationships end when you’re with me,” she said.) A stirring version of 2005’s “Moonlight (A Vampire’s Dream),” which ended with a fur-swaddled Nicks thrashing as the music churned around her, was followed by her confession that it was probably her favorite song of the past quarter-century, and that it was inspired by “Twilight,” the brooding vampire romance that definitely has a bit of Nicks in its DNA.

But perhaps the biggest treat of the night, aside from Nicks strutting through 19 pieces of her catalog, was the way Nicks related to the audience as a clutch of potential peers, creative fireworks waiting to be lit. “If you are a creative person — which you all are — you can always go out and follow your dream,” said Nicks after performing the 1973 Buckingham/Nicks track “Crying in the Night.” “And 43 years later, you can stand on a stage, or in your house, and do something you wanted to do since you were 21 years old when you’re 68 years old.” The message was only made stronger by its messenger, a woman who honors the power of words with every song she writes, and who remains one of rock ’n’ roll’s brightest lights.