Reviews Stevie Nicks with The Pretenders Live in Detroit Nov 27, 2016

Stevie Nicks and the Pretenders rock fans for three hours at The Palace
By Edward Pevos
Mlive.com - includes Photos 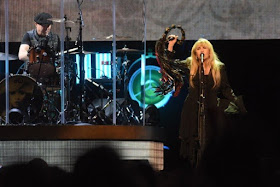 AUBURN HILLS, MI - They have two of the most distinctive voices in music history, Stevie Nicks and Chrissie Hynde. Question is: How do they sound today?

The music icons were in concert at The Palace of Auburn Hills on Nicks' "24 Karat Gold Tour" on Sunday, November 27, 2016. 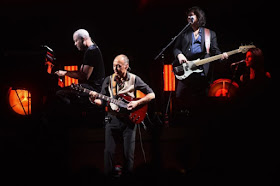 Chrissie Hynde put a little more umph when singing the "Brass in Pocket" line: "been driving Detroit leaning." She and the Pretenders are fresh off the release of their 10th studio album, "Alone," in 2016.

Hynde and the band performed some new stuff, some old stuff and the band's biggest hits including "I'll Stand By You," "Back On The Chain Gang", "Don't Get Me Wrong," and the aforementioned "Brass in Pocket."

To put it short and sweet, Hynde performed nearly every lyric and every note of each song the way it was meant to be performed. The 65 year old's voice is as powerful and flawless as ever. Hearing her live, along with a solid band was a real treat before the main course.

Stevie Nicks:
That main course was the living legend herself, Stevie Nicks. When you see her without her Fleetwood Mac band mates, you are treated to not only some of her big Mac hits, but many of her solo classics and duets.

No, that wasn't Tom Petty singing with Nicks on their classic "Stop Draggin' My Heart Around." Nicks brought out the Pretenders lead singer Chrissie Hynde for a fun rendition of the 1981 hit which originally featured Petty.

Nicks nearly 20 song setlist also included a few songs from her newest and 8th studio album, 2014's "24 Karat Gold." The album is actually filled with new versions of demos that Nicks recorded from 1969 to 1987 with a couple from the 90s. Each song has a story, and Nicks made sure to take a minute to tell the crowd about how her songs came to life.

In her two hour set, Nicks mixed in three Fleetwood Mac hits with "Gypsy," "Gold Dust Woman" and "Rhiannon." Her solo hits included "Stand Back" and "Edge of Seventeen." She also threw in some deeper tracks with "If Anyone Falls," "Wild Heart," "Bella Donna" and "Enchanted."

The 68 year old Nicks still has that amazing voice which is both hypnotizing and mesmerizing. I think fans would have liked to have heard a couple more Fleetwood Mac songs, and I'm not sure what happened to "Leather and Lace," the show closer for most of the tour so far, but if you get a chance to see Nicks in concert, it's well worth your time and money. You never know how many times she'll be back again, with or without Mac.


AUBURN HILLS -- At the start of her concert Sunday night, Nov. 27, Stevie Nicks told the crowd at The Place that, “This show is not what you are going to think it will be.”

In other words, it was time for something other than a pro forma parade of hits -- which Nicks certainly has the catalog to do -- over its two hours and 17 songs.

Those hits were there, of course, from a pounding “Stop Draggin’ My Heart” around with Chrissie Hynde of the Pretenders, who opened the show, guesting to Fleetwood Mac favorites such as “Gypsy,” “Gold Dust Woman” and “Rihannon” and Nicks solo successes like “Stand Back” and “Edge Of Seventeen.” But the show -- ostensibly promoting Nicks’ 2014 rarities album “24 Karat Gold: Songs From The Vault” -- was also designed as a dive into what she called “the gothic trunk of magical, mysterious things, something different for me after all these years.” And that troll unearthed some of the night’s best moments.

Nicks and her eight-member band started the night digging deep, in fact, with the country-flavored “Gold And Braid” from her 1988 box set “The Enchanted Works of Stevie Nicks” and a slightly twanged-up arrangement of “If Anyone Falls” from her 1983 sophomore solo album, “Wild Heart.” Nicks was in robust if not always accurate voice -- shuffling around the stage in formidable high heels and sporting eight different shawls during the course of the show plus, for one song, a full-length white fur coat -- as she pulled out “24 Karat Gold” rockers such as “Belle Fleur” and “Starshine” (a collaboration with Tom Petty that sat in the vaults for two decades) and the moody epic “Moonlight (A Vampire’s Dream).”

She neatly pared the title tracks of her first two albums, “Bella Donna” and “Wild Heart,” draped in the original shawl she wore on the album cover for the former, while a muscular performance of the 1973 Buckingham Nicks track “Crying In The Night” added a bit of pre-Fleetwood Mac fame perspective to the show.

Nicks had plenty of stories to tell as well, some specifically about the songs, others about the circumstances surrounding them. She spoke about the struggle, especially during the early 80s, of balancing her solo work with Fleetwood Mac -- “They’re not understanding. Very nice people, but not very understanding,” Nicks noted -- and she paid tribute to Prince with video screen images during “Stand Back” and “Edge Of Seventeen.” “Prince and I were friends,” Nicks acknowledged. “There’s a story. I’m not ready to tell it yet. It was a long, crazy friendship, a lot of phone calls, a lot of philosophy...”

Nicks’ show accented the songs with plenty of eye candy, too, including animations, prepared videos and vintage photos on the rear-stage LED screen, while orb-shaped chandeliers and light bulbs floated overhead in shifting formations. The effect may have indeed been a different kind of show for Nicks, but also proof that different can be good.

The Pretenders’ generous, hour-long opening set, meanwhile, was its own revelation. With Hynde’s punky swagger still evident -- and her voice as potent now as it was when the group emerged during the late 70s -- the quintet touched on its new album, “Alone” and Hynde’s 2014 solo album “Stockholm,” but mostly tore through 80s touchstones such as “Message Of Love,” “Back On The chain Gang,” “Don’t Get Me Wrong,” My City Was Gone,” “Mystery Achievement” and a ferocious “Middle Of The Road.” Hynde and company, including original drummer Martin Chambers, effectively dialed it down for torchy, soulful performances of “Hymn To her” and “I’ll Stand By You,” and by the time it wrapped with “Brass In Pocket” the group had done considerably more than just warm the Palace crowd up for Nicks.