The legendary rock acts paired for a night of musical perserverance during Nicks' 24 Karat Gold Tour stop in New York.

"It's a pleasure to be back in New York with a message of love!" declared Chrissie Hynde, legendary frontwoman for Rock and Roll Hall of Famers The Pretenders, as her band indeed launched into the martial swing of their 1981 classic "Message of Love" on Thursday night (Dec. 1). After beginning their opening set with two riotous numbers off the group's fine new LP Alone, "Message" properly jolted the packed crowd at Manhattan's Madison Square Garden to life, and Chrissie & Co. took it from there, captivating with an expertly paced set that reminded why the group still has to be included in any discussion of the greatest active rock bands.

Despite leading with some new songs and making a couple early deep-cut detours (Hynde's 2014 solo single "Down the Wrong Way," Get Close paean to femininity "Hymn to Her"), the band mostly kept to the hits and the fan favorites afterwards -- even indulging the crowd with a singalong of 1994 power ballad "I'll Stand By You." But the now-quintet kept it tight throughout, and though Martin Chambers -- the only original member remaining besides Hynde -- may no longer quite live up to Chrissie's billing of him as "The World's Greatest Rock Drummer," the group still shredded their way through ragers new and old with typical Akron-via-U.K. muscle. (Appropriately, Hynde got some of the biggest cheers of the night when she rolled up the sleeves on her Elvis T-shirt.)

The Pretenders stayed mostly apolitical throughout their set, though perhaps inevitably for a show by a punk-bred band in the year 2016, there was a sense of desperation throughout, as songs like "My City Was Gone" took on extra significance, and even the group's more personal numbers felt as hefty as hymns. Hynde introduced their latest single "Holy Communion" as a song about "religious tolerance," but then shortened that to just "tolerance," declaring hopefully: "If you're answering to him" -- pointing skyward -- "You're probably going to be all right."

Of course, the real figure of worship for Hynde on stage was her touring partner, the iconic singer/songwriter and Fleetwood Mac frontwoman Stevie Nicks, who Hynde gushed about throughout her set ("It's like being on tour with Elizabeth Taylor!"). The Church of Stevie was definitely in session from the opening songs of her headlining set, and her lead disciple even came back on stage to serve as her Tom Petty on a stellar duet of Nicks' breakout solo hit, "Stop Draggin' My Heart Around." "I'm gonna marry her," declared an ecstatic Hynde after the performance. "So don't get any ideas."

Even with that early moment of fan wish-fulfillment, Nicks made it clear early in her set that crowd-pleasing wasn't going to be her primary goal for the evening. "It's not gonna be the same show that you're used to seeing," she warned of her gig to come, instead promising "magical gothic things from my gothic trunk of secrets and mysteries." What followed was a set full of little-heard rarities like "Starshine," a reject from 1981 solo debut Bella Donna that eventually ended up on 2014's 24 Karat Gold - Songs From the Vault and "Crying in the Night," a Buckingham-Nicks-era favorite that Nicks rarely played live before this tour.

The centerpiece of the performance was undoubtedly "Moonlight (A Vampire's Dream)," the dramatic power ballad whose recording reinvigorated Nicks' solo career in the early '10s, and which she now calls "my favorite song I've ever written." The singer/songwriter, cultivating a family atmosphere throughout the evening with her convivial storytelling -- even the introduction of her band, which she promised to keep brief, was deeply felt enough to take ten minutes -- explained the origins of the song as having been inspired by the doomed romance at the heart of the Twilight film franchise. "There's nothing like a tragic love affair," Nicks concluded.

For most of her set, Nicks kept Fleetwood Mac material to a minimum, only including 1982's "Gypsy" among her first 14 songs. It was enough delayed gratification that when her drummer launched into the arid, cowbell-led clomp of the Rumours closer "Gold Dust Woman," the building erupted in release. That rapture that only built through set closer "Edge of Seventeen" -- with a "When Doves Cry"-cribbed outro, paying tribute to Nicks' late friend Prince, who she'd previously talked about building early hit "Stand Back" with -- and first encore, the witchy-woman all-timer "Rhiannon."

The night closed with the Mac perennial "Landslide," and 40 years and hundreds of covers later, there's still nothing that properly prepares you for the sound of Nicks' simultaneously gravelly and feathery wisp intoning that first "Took my love, and I took it down..." In a time of national tumult and insecurity, the song can't help but take on a "Hallelujah"-like resonance, and its healing powers were on full display at MSG as the crowd belted every word along with their leader. "Rise above the fray," Nicks advised as her band exited. "Get in your car, and turn it up." 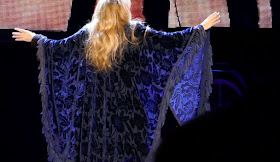