New Book: Love that Burns - A Chronicle of Fleetwood Mac by Mick Fleetwood - will speak at SXSW 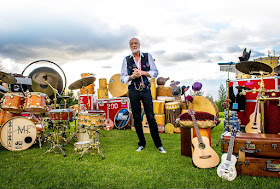 Fleetwood Mac drummer Mick Fleetwood is among a large group of speakers announced today for this year’s South by Southwest daytime conference lineup.

Fleetwood’s appearance is related to his upcoming book “Love That Burns: A Chronicle of Fleetwood Mac” via Genesis Publications.

Fleetwood Mac, a band that boasts some of the highest-selling records of all time, has weathered countless trials and tribulations on the road to success. Mick Fleetwood, legendary drummer and founding member speaks with Rolling Stone magazine's David Fricke, unravelling the dramatic history of a band that emerged from the British Blues Boom. The discussion will be illustrated with rare images selected from the forthcoming collaboration with Genesis Publications, the limited edition Love that Burns - A Chronicle of Fleetwood Mac.

Love that Burns - A Chronicle of Fleetwood Mac is Mick Fleetwood's account of the early blues era of Fleetwood Mac and the musical legacy of the uniquely talented Peter Green. Beautifully produced in the Genesis tradition, each handcrafted book, limited to 2,000 numbered copies worldwide, will be signed by the artist.

To celebrate the announcement of this collaboration, Genesis Publications are offering an exclusive SXSW VIP package to a small group of early book buyers. Join us at the official SXSW event, be among the first to secure your number in the edition, enjoy an invitation to a VIP 'meet & greet' and have your copy personally dedicated by Mick Fleetwood through a commemorative bookplate.

Mick will speak from 5-6PM on March 15 in Room 16AB of the Austin Convention Center.

For more information on the book visit: www.fleetwoodmacbook.com
Nickslive at Tuesday, February 07, 2017
Share