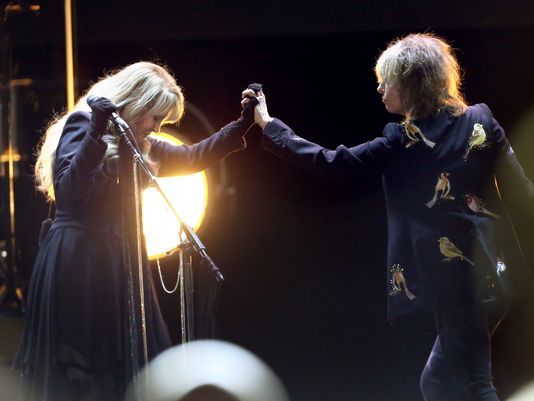 It was a fitting close to International Women’s Day as two of rock’s iconic female figures, Stevie Nicks and the Chrissie Hynde, took the stage of FedExForum on Wednesday. Appearing with her solo band, Fleetwood Mac star Nicks was the ostensible headliner, but it was Hynde and her group The Pretenders who stole the show, with both women presenting district and distinctly different visions of musical and personal empowerment.

Resuming her work with the Pretenders last summer after a four-year break, Hynde and the band — which includes founding drummer Martin Chambers and new-era additions James Walbourne on guitar, Nick Wilkinson on bass and Eric Heywood on pedal steel — sounded sharp and inspired during a 15-song set that covered the expected hits as well as material from the band’s recent album, “Alone.”

Hynde was in classically cantankerous form early on, rightfully berating a couple of audience members down front who were popping off cell phone camera flashes in her face. After apologizing — on their behalf — Hynde settled down and found both the aggression and nuance of songs like “My City Was Gone” and “Stop Your Sobbing.”

Thirty-five years after the implosion of the original Pretenders lineup — following the death of guitarist James Honeyman Scott and the firing and subsequent death of bassist Pete Farndon — Hynde and Chambers have somehow managed to keep the group a compelling force, with the new members, particularly flash guitarist Walbourne, providing a fresh spark.

One of rock’s most stylish singers, Hynde also showed a depth of emotional range on the spare ballad “I’ll Stand by You,” while one of her rare solo songs, “Down the Wrong Way,” seemed to take on new life in the Pretenders context.

Ohio native Hynde took the opportunity to rave about Memphis, having visited several local haunts — Graceland, Shangri-La Records and Imagine Vegan Café — on a day off before the concert. She noted that she skipped a return to the local jail, where she stayed during the Pretenders' first tour on disorderly conduct charges after kicking out the windows of a police car. “They didn’t want me back,” she quipped.

After a brief break, Nicks and her big band — which included longtime guitarist/musical director Waddy Wachtel on guitar — emerged, sounding strong, if somewhat measured during their 18-song performance.

Nicks presented the set as part storyteller’s session, part deep dive into her catalog. Vocally, she was in fine form, but the somewhat awkward pacing — songs broken up by Nicks’ long  narrative interludes — meant that musical momentum was hard to sustain.

Still, Nicks’ tremendous personal charm — part girl next door, part witchy woman, part mother figure — was hard to resist, and the crowd of devotees were held rapt by her, expressing their devotion vocally and visually, with many dressing in homage to her (sartorially speaking, the audience at a Nicks concert could double for a renaissance fair crowd).

The liveliest moment of Nicks' set came during an early version of the Tom Petty-penned “Stop Dragging My Heart Around” as Hynde emerged from the wings and the women, along with Wachtel, presented the song as a three-way romantic drama.

Ultimately, amid all the stories and banter, Nicks managed to cover all the expected ground, delivering strong versions of her solo hits (“Stand Back,” “Edge of Seventeen”) and closing with a flourish of Fleetwood Mac favorites (“Rhiannon,” “Gold Dust Woman,” “Landslide”) that were impossible to resist.


"We've followed her for seven cities now," a man 20-years-my-senior told me midway through Stevie Nicks' 18-song set. "Amazing, after all these years, she's still got it."

She never lost it. Backed by a multi-piece band that included a pianist, hammond organist, two backup vocalists, a drummer, bassist, and longtime musical director and guitarist Waddy Wachtel, Nicks' brought a storied discography to life — a "gothic trunk of lost songs." Tracks she wrote over the span of 40 plus years; deep cuts from albums that seldom or never got the live treatment. The audience didn't mind, an eclectic bunch: mothers and daughters, married couples and young couples, a man in a top hat hopelessly waving a bouquet of white roses in Nicks' direction, a pack of gypsies who led me to my seat.

The energy was palpable, though, when Nicks and co. rolled through Fleetwood favorites like Gypsy, a moment when anyone still sitting found their feet; Gold Dust Woman, made bigger than ever by her band; Rhiannon, the alcohol had taken hold by this one, there was lots of aisle-dancing; and Landslide, the stripped down closer, during which there was lots of hugging and audible disappointment that the show would soon end.

Nicks, donning a black dress with flowing sleeves, a sequined shawl, black fingerless gloves, and, for "Bella Donna," the original silk chiffon scarf ($2,000 when purchased, "ah, shit, that's a lot of money, Stevie," said a concerned person behind me) draped over her in the 1981 promos, paused briefly after her first song and scanned the Fedex Forum.

"You have to let us, for a minute, sink into your Memphis-ness," she said. "You know this is a very special city. This is on that list of cities — Los Angeles, San Francisco, Nashville, Memphis, New York — where you come into the city knowing those are the important shows. I'm extremely happy to be here in your musical city that has so much history."

Each song came with a story, a bit of nostalgia about who she was and where she was when they were written. Stand Back was born after Nicks heard Prince's Little Red Corvette on the radio and wrote lyrics around his melody. After getting his approval, Prince visited her in the studio, where he played on the track, and the two played a game of basketball. A montage of photos of Prince would later appear on screen behind her, a source of motivation for Nicks.

Nicks' storytelling broke up what could have been a traditional arena rock production. "I could do this until I'm 90 years old," Nicks said. "Because I have fans who are kind enough to listen." Her diving into the details brought a closeness to the audience, removing a wall. We could have been in her living room. When she went into Stop Draggin' My Heart Around, which she wrote with Tom Petty as their friendship blossomed, show opener Chrissie Hynde of The Pretenders appeared from the darkness to sing.

Earlier in the evening, The Pretenders' bare-bones band — drums, bass, guitar, pedal steel — showcased Hynde's magnetism. On "I'll Stand By You," Hynde's vocals were as powerful as they've ever been. Wearing a Shangri-La Records T-shirt, Hynde said the band had a better experience in Memphis this go around, visiting Graceland and Imagine Vegan instead of the jail where she was once held overnight for disorderly conduct.

"Memphis is progressing in the right way," Hynde said. "But I didn't go to the jail where I was held overnight for kicking out the windows of a police car. They didn't want me back."

Closing the show, Nicks revisited 1973, when she lived for three months in Aspen, Colorado on $250. One evening while home alone in a condominium where she was renting a room, Nicks' wrote Landslide on an acoustic guitar, finding the lyrics as they came to her.