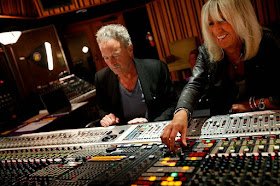 No word yet on whether or not other members of Fleetwood Mac will join the pair onstage. Tickets go on sale Friday, April 14th at 10:00 AM.

(the information and link have been removed from the site. Someone likely jumped the gun and posted a little too early so an official announcement will likely be coming soon.)

The duo, who have been recording an album together, will play Chateau Ste. Michelle Winery in Woodinville, WA., on July 19. Tickets start at $59 for lawn seats.

Buckingham and McVie began writing songs for a new Fleetwood Mac record three years ago, but Stevie Nicks‘ resistance to recording new music led the pair to record the songs on their own. Buckingham McVie is set to drop later this summer.

Fleetwood Mac drummer Mick Fleetwood opened up to Uncut about his band mates’ side project. “This relationship is a real expression of a musical powerhouse that’s come to the fore, and we’re all happy about that,” he said. “It’s really cool. I think they’ll be walking down some red carpets with this one.”