Did he jump or was he pushed? 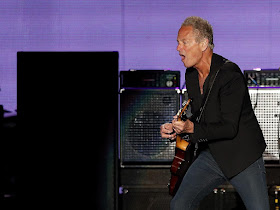 Did he jump or was he pushed?

In the matter of Lindsey Buckingham's departure from Fleetwood Mac, the answer isn't yet clear.

On Monday, the veteran rock band issued a statement announcing that Buckingham — the singer and guitarist with whom Fleetwood Mac made such genre-defining albums as "Rumours" and "Tango in the Night" — would not be performing with the group on its upcoming tour.

Rolling Stone said that Buckingham had been fired over a disagreement pertaining to the tour; Variety cited a source who said Buckingham's leaving was harder to classify. (A representative for the band said she wasn't authorized to speak on Buckingham's behalf.)

Either way, the speed with which the guy was replaced — on tour, Fleetwood Mac will be joined by Mike Campbell of Tom Petty's Heartbreakers and Neil Finn of Crowded House — suggests that Buckingham's former bandmates weren't exactly tripping over themselves to keep him off the ledge.

Dude puts his own career on hold to team up with an unremarkable English blues-rock band, then quickly transforms that band into one of the world's most popular acts — and this is the thanks he gets?

But maybe stepping away from Fleetwood Mac, voluntarily or not, was actually a smart move for Buckingham, at least in a creative sense.

Anyone paying attention over the last few years could tell he didn't seem to be having much fun with the group he'd been with (on and off) since the mid-1970s, when he and his then-girlfriend, Stevie Nicks, teamed up with Mick Fleetwood, John McVie and Christine McVie to make the chart-topping "Fleetwood Mac" album that spun off hits like "Rhiannon" and "Landslide."

Sure, Christine McVie's surprising return to the group in 2014 (after a long break that began in 1998) appeared to go some way toward recharging Buckingham's enthusiasm.

At the Forum that year, he looked and sounded genuinely psyched to be playing McVie songs like "Little Lies" and "Everywhere" again, even as the concerts kept him from concentrating on the idiosyncratic solo work that seems truly to float his boat these days.

By last summer, though, Buckingham was sleep-walking through Fleetwood Mac performances like the band's miserable headlining set at the Classic West festival at Dodger Stadium — a gig he openly described to me in advance as a cash-grab.

And yet it wasn't the case that Buckingham had simply run out of inspiration.

Just weeks before the Classic West, he and McVie released an excellent duo record that demonstrated how much juice he still has as a songwriter and a studio tinkerer.

And as a performer too: Last May, I spent an afternoon watching Buckingham and McVie rehearse on a Culver City soundstage in preparation for a run of shows behind their record. The playing was taut and energetic, the singing full of color and energy — no doubt because they were doing new stuff as opposed to the oldies they've each played a zillion times before.

Which makes you wonder if the disagreement Rolling Stone pointed to about Fleetwood Mac's upcoming tour had to do with what the band was going to play on the road.

If anyone in the group was likely to advocate for more obscure tunes — or maybe some from the band's most recent recording, 2013's overlooked "Extended Play" EP — it was Buckingham, who famously steered Fleetwood Mac toward the deranged "Tusk" in the wake of "Rumours'" runaway success.

But perhaps that idea was met with less warmth than he'd anticipated. (Also possible: Buckingham wanted more money than anyone was willing to give him — likely more, anyway, than Campbell or Finn will get for doing his job.)

Whatever friction led to his departure, it wasn't the first time Buckingham had experienced misgivings about playing in Fleetwood Mac. In the late '80s, of course, he quit after "Tango in the Night," only to come back a decade later.

And as he told me last year, he thought hard about joining the band in the first place, given that the gig would take away from his and Nicks' ability to support the "Buckingham/Nicks" record they released in 1973.

"It's not like we weren't a little conflicted as to what we might be giving up, even though the album hadn't really prevailed commercially," he said in Culver City. "But there was this sense that something was happening — a groundswell."

"It was a great record," McVie piped up.

"Dozens loved it," Buckingham said with a wry chuckle. "But the irony was that, because of some of the opening spots we'd done on shows around the country" — warming up audiences for the likes of Jefferson Airplane and Janis Joplin — "we were able to go back and headline for like 5,000 people.

"And that made us wonder if we should wait and see if this thing was going to take on some kind of momentum that it hadn't yet taken on."

As he spoke, Buckingham seemed to get a little wistful, as though several decades (and tens of millions of dollars) later, he was still second-guessing himself — pondering what precisely he'd given up by becoming a member of one of the biggest bands in the world.

"We weighed the pros and cons, and we made the decision not to see that through," he said.

Nobody's keeping him from doing his own thing now.
Nickslive at Tuesday, April 10, 2018
Share