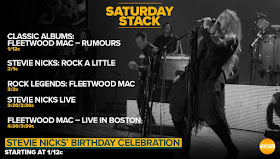 Los Angeles, CA (May 16, 2018) – AXS TV is celebrating iconic songstress Stevie Nicks’ upcoming birthday with a career-spanning lineup packed with performances and profiles on her actual birthday — Saturday, May 26 starting at 1pE/10aP.

The festivities begin with an in-depth look at one of the band’s most influential works, taking viewers behind the scenes and into the studio as Nicks, Lindsey Buckingham, Christine McVie, Mick Fleetwood, and John McVie discuss the creative process behind Rumours in Classic Albums: Fleetwood Mac – Rumours. An encore broadcast of Classic Albums will air at 6:30pE. The GRAMMY®-nominated 1986 concert Stevie Nicks: Rock A Little follows at 2pE, as Nicks takes the stage at the Red Rocks Amphitheatre for a powerhouse set featuring “Edge Of Seventeen,” “Talk To Me,” “Stand Back,” and “Dreams,” with guest appearances by Mick Fleetwood and Peter Frampton. An encore broadcast of Rock A Little will air at 7:30pE.

The day continues at 3pE with the 2014 profile series Rock Legends: Fleetwood Mac, compiling expert interviews, rare archive footage, classic concerts and more to tell the story of the band’s incredible legacy. An encore of Rock Legends airs at 8:30pE. Then, at 3:30pE, Stevie breezes into The Windy City for an intimate evening, blending solo hits and Fleetwood Mac favorites in Soundstage: Stevie Nicks, with an encore at 9pE. And Nicks is back in action with Fleetwood Mac, as the band brings the Say You Will Tour to the FleetCenter for an unforgettable show featuring “Rhiannon,” “Gold Dust Woman,” “Go Your Own Way,” and many more in Fleetwood Mac, Live In Boston at 4:30pE with an encore broadcast at 10pE.

The block comes to a close at 12aE, as Fleetwood Mac’s dynamic duo reunites for a once in a lifetime event in Lindsey Buckingham With Special Guest Stevie Nicks. The hit-fueled set features Buckingham’s priceless stories revealing the meanings—and controversies—behind some of the most beloved songs from his acclaimed career, before launching into an eclectic setlist that includes “Trouble,” “Murrow Turning Over In His Grave,” “Big Love,” “Peacekeeper,” and “Someone’s Gonna Change Your Mind,” headlined by an emotional duet with Nicks on the Fleetwood Mac signatures “Never Going Back Again” and “Say Goodbye.”