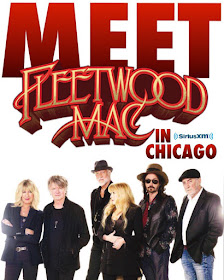 To celebrate SiriusXM’s The Fleetwood Mac Channel, we’re giving you the chance to win a trip to Chicago to see them in concert from the FRONT ROW... plus meet the band!

The legendary, GRAMMY-award winning band recently announced a North American tour that will kick off in October and travel through 50+ cities ending in Spring of 2019. Produced by Live Nation, the tour will feature the newly announced line-up of Mick Fleetwood, John McVie, Stevie Nicks, and Christine McVie along with newcomers Mike Campbell (Tom Petty and the Heartbreakers) and Neil Finn (Split Enz, Crowded House).

One Grand Prize Winner will receive a trip for two to Chicago including airfare, hotel stay, two front row tickets to see Fleetwood Mac at United Center on Saturday, October 6 and a meet and greet with the band!

SiriusXM’s The Fleetwood Mac Channel runs through May via satellite on channel 30, and through the SiriusXM app on smartphones and other connected devices, as well as online at siriusxm.com.

OPEN ONLY to active SiriusXM subscribers (self-paid or an introductory trial) since April 19, 2018 while meeting other geographical Conditions of Entry as provided in the Official Rules, and are at least 18 years of age at time of entry. See Official Rules for details and eligibility requirements.