Check it out... Fleetwood Mac on The Ellen Show 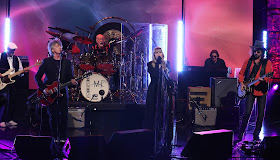 The televised appearance marked the longtime band’s first time playing live alongside guitarists Mike Campbell, formerly of Tom Petty and the Heartbreakers, and Crowded House’s Neil Finn, both of whom stepped in after Fleetwood Mac fired Lindsey Buckingham in April.

Both guitarists featured prominently in the performances, flanking to the left and right of Stevie Nicks; on both “The Chain” and “Gypsy,” Finn handled the vocal parts previously sung by Buckingham, particularly on “The Chain,” where Finn and Nicks showcased their budding vocal chemistry.

The unveiling of the new Mac comes with just under a month before the lineup embarks on a North American tour that begins October 3rd in Tulsa, Oklahoma. The 52-date trek keeps the ever-changing band on the road until April 2019.

“There are 10 hits we have to do,” Nicks previously told Rolling Stone of the tour. “That leaves another 13 songs if you want to do a three-hour show. Then you crochet them all together and you make a great sequence and you have something that nobody has seen before except all the things they want to see are there. At rehearsal, we’re going to put up a board of 60 songs. Then we start with number one and we go through and we play everything. Slowly you start taking songs off and you start to see your set come together.”

Buckingham will launch his own solo trek in October.