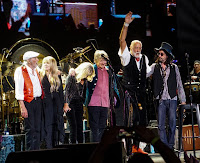 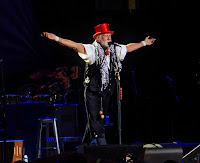 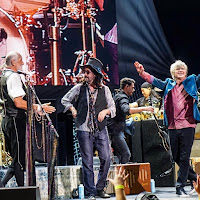 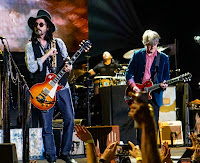 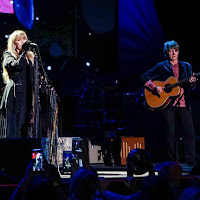 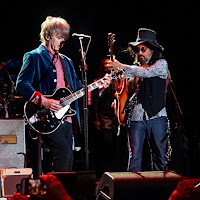 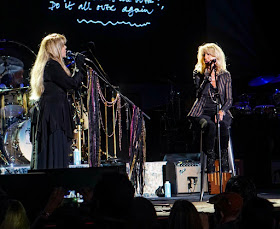 One year and one day after the loss of gone-too-soon Tom Petty, Fleetwood Mac launched a new North American tour and unveiled a new roster at Tulsa’s BOK Center.

The additions, who came aboard following the departure of Lindsey Buckingham, are Mike Campbell, former guitarist of Tom Petty and the Heartbreakers, and Neil Finn, vocalist for Crowded House and Split Enz.

“I can’t tell you how much it means to us that you are all here tonight to share this with us,” Campbell told a sold-out crowd.

Fleetwood Mac drummer Mick Fleetwood was asked in a pre-concert interview if the set list would include any Crowded House or Petty songs, or whether there might be a tribute to Petty.
“I can attest that there will be,” Fleetwood said.

Fleetwood didn’t want to cite specific songs — why ruin the surprise? — but answers came when the Rock and Roll Hall of Fame band, no stranger to personnel changes, began a new chapter Wednesday night.

The Petty tribute, an emotional highlight of the show, came during the encore. The first song of the encore was Petty’s “Free Fallin’” with vocals provided by Stevie Nicks, a longtime Petty friend. Images of Petty were shown on a screen behind the stage as Fleetwood Mac performed the song. Judging by the number of mobile phones held high, it was the most video-ed moment of the night.
Two songs from Finn’s ouevre were on the set list, including “I Got You” (the highest-charting Split Enz single in the U.S.) and “Don’t Dream It’s Over” (Crowded House’s biggest hit, it went to No. 2 in 1986). Nicks contributed vocal help on both songs.

Immediately before Finn sang “Don’t Dream It’s Over,” Fleetwood said this: “Many years ago I heard this beautiful song and, for me, it opened many doors in my heart, so this all eventually led to this lovely gentleman sharing the stage with us in Fleetwood Mac, so make him really welcome as he sings this most beautiful song.”

The new kids and the Fleetwood Mac vets — Fleetwood, John McVie, Christine McVie and Nicks — played for almost two and a half hours and, perhaps feeling adventuresome in the wake of a lineup change, detoured to some interesting places.

Also on the set list: “Tell Me All the Things You Do” from the 1970 album “Kiln House,” the Bob Welch-penned “Hypnotized” from the 1973 album “Mystery to Me” and “Oh Well,” which was sang Wednesday night by Campbell and was originally recorded by Fleetwood Mac in 1969. (For context’s sake, consider that Nicks and Buckingham didn’t record with the band until 1975.)
Buckingham and Fleetwood Mac parted company in April. Do you really want a band with so many great songs to call it quits just because a key member is no longer part of the squad? Of course not.
Wanting to forge ahead, Fleetwood Mac took the hydra approach (lose one head; two will take its place) and announced a new tour.

At 8:14 p.m. Wednesday, when the new incarnation of the band took the stage, Fleetwood flashed a smile that was captured on the video screen. He and his band mates opened with “The Chain,” which has history as a show-starter and gave curious audience members a chance to immediately hear Finn at the microphone. The song didn’t match completely the version stuck in your brain from decades of hearing it, but Finn sounded like a natural fit in songs like “Go Your Own Way” and “Second Hand News.”

Introducing himself, Finn said, “My name is Neil and it’s a huge honor to be with you tonight with this magnificent band.”

A New Zealander, Finn also said this: “I would like to do a big shout-out to another fellow countryman who works just down the road, Mr. Steven Adams for the Oklahoma (City) Thunder. (He’s) the toughest guy in the league. I’m not even in the toughest person in Fleetwood Mac. I think that’s Stevie.”

Early in the show, Campbell looked at his new band mates and smiled. Nobody seemed to have more fun than Fleetwood, especially during a drum solo bookend-ed by the start and finish of “World Turning.” He introduced the rest of the band afterward and said it was a joy and privilege to welcome the new members.

Sometimes the whole cheer-for-an-encore thing feels too staged or expected, but the audience reaction (mobile phones illuminated, continuous roaring) suggested the crowd absolutely wanted more Fleetwood Mac, and that’s what they got when the anticipated Petty tribute arrived and was followed by two other songs — “Don’t Stop” and “All Over Again,” a song that Christine McVie said was about change.

A big change happened in the ranks of Fleetwood Mac. But here's the takeaway: The tour launch didn’t feel like you were watching/hearing something less than Fleetwood Mac.