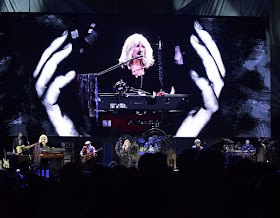 Once the members of Fleetwood Mac realized it would take two players to replace one Lindsey Buckingham, did they question whether moving forward made any sense?

That question was ultimately answered when the classic band played the Enterprise Center on Saturday night in front of 13,400 fans, many likely wondering how Fleetwood Mac would pull off a Buckingham-free tour with Neil Finn and Mike Campbell as newcomers to the fold.

As we all know, Buckingham was a key singer, songwriter and guitarist with the band as far back as the ’70s, but parted ways early this year over touring conflicts (reportedly everyone was ready to go out on the current tour except for Buckingham, so they went without him).

It has been messy ever since, resulting in Buckingham filing a lawsuit against the band over $12 million in lost touring wages.

Touring without Buckingham is a punch to the gut not only to Buckingham but to fans who want their Fleetwood Mac intact.

“The Mac is definitely back,” drummer Mick Fleetwood said at one point. And it’s true though different from before.

During band introductions, Mick Fleetwood said Campbell (Tom Petty and the Heartbreakers) and Finn (Crowded House, Split Enz) had their own stories to tell before joining “this crazy band,” and gave them time to show who they are, within the context of Fleetwood Mac and on their own.

Opening with “The Chain,” the combination of Mick Fleetwood, Stevie Nicks, Christine McVie, John McVie, Campbell and Finn felt tentative initially. It was hard to tell how this would all play out. “Little Lies” and “Dreams” were safe second and third song choices with Christine McVie and Nicks on lead, respectively.

The first real test came with the Buckingham-penned “Second Hand News,” on which Finn assumed lead and to his credit pretty much nailed it. And with that was the realization the new Fleetwood Mac isn’t a bad thing, but rather a different thing. And maybe a shake-up is necessary at times to bring new elements into an old thing.

It was smooth sailing from there, as the band performed expected staples such as “Say You Love Me,” “Go Your Own Way,” “Everywhere,” “Rhiannon,” “Gold Dust Woman,” giving Nicks and Christine McVie their required moments to shine. But there were also a few surprises, and songs unique to Finn and Campbell.

Among the moments that could have happened only with this version of Fleetwood Mac were Campbell augmenting a version of “Gypsy,” Finn on a cover of Split Enz “I Got You” (perhaps not so much a big deal) and more memorably, the cover of Crowded House’s “Don’t Dream It’s Over” showcasing Finn, and Nicks and Finn on “Landslide.”

Finn blended with Christine McVie on “Tell Me All the Things You Do” and with Nicks and Christine McVie on “World Turning.” The latter included an enthusiastic super extended drum solo from Mick Fleetwood as the other players left the stage, with plenty of screaming call-and-response between him and the crowd.

One nice inclusion was Nicks singing lead on “Black Magic Woman,” which was a Fleetwood Mac song before it was a Santana song. If in name only, outside of “Gypsy,” is there a song with a title better suited to her? The song culminated with Christine McVie and Campbell jamming on piano and guitar with her, respectively.

The concert fell on the occasion of what would have been Petty’s 68th birthday, marked here by “Free Fallin” with Nicks on lead, which opened the encore (Fleetwood Mac has actually been playing the song all month on tour). Petty’s wasn’t the only birthday celebrated.There was also a quick nod to Chuck Berry, who would have been 92 on Oct. 18, with Campbell offering a few quick licks of “Johnny B. Goode” before going into “Oh Well.”

Mick Fleetwood addressed the crowd at the end of the show, a St. Louis backdrop behind him, and thanked fans for support and encouraged them to be kind to each other.