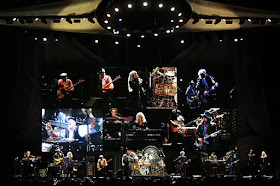 Every instance when the current members of Fleetwood Mac chanted “chains keep us together” at the United Center on only the second night of a North American tour that stretches well into 2019, it seemed to be much more than a chance for the audience to sing-a-long to what’s become its standard opener “The Chain,” but rather an internal commitment that no matter the degree of drama transpires, at least some version of the band will always exist. For those who missed the latest soap opera episode of what could easily be dubbed “As Fleetwood Mac’s World Turns,” the core four of drummer Mick Fleetwood, bassist John McVie, vocalist/keyboardist Christine McVie and singer Stevie Nicks are continuing for the second time without Lindsey Buckingham, who’s been let go this round (and touring solo through the Athenaeum Theatre on October 17), but once again replaced by two players.

Chances are even those who weren’t keeping up with the saga could instantly recognize the fresh faces, Neil Finn (of Crowded House and Split Enz fame) and Mike Campbell (from Tom Petty & The Heartbreakers), who dived head first into the Fleetwood Mac fold, despite Buckingham’s integral contributions being noticeably absent and missed. Then again, this is an act that’s been through numerous editions and incarnations (including most recently Christine McVie’s temporary retirement with merely Nicks and Buckingham out front in the 2000s), so it really wasn’t that far of a stretch to accept, at least as far as the venue’s sold out status was concerned.

Shaking up the line-up was accompanied by the unexpected inclusion of several rarities in between the main classics for well over two hours, which between all the players collectively and individually, meant there were tons of choices. “Little Lies,” “Dreams,” “Say You Love Me,” “Everywhere” and “Rhiannon” were just a handful of the Stevie and Christine notables that came across as sweet as ever, bathed in a wall of harmonies that may have sounded a bit different than the original records given the adjusted configuration, but were nonetheless textbook Fleetwood Mac.

The new recruits also had many chances to make the acquaintance of longtime fans in this format, with Finn excelling on Split Enz’s “I Got You,” Crowded House’s “Don’t Dream It’s Over” in an enchanting duet with Nicks, plus the set list shockers “Tell Me All The Things You Do” and “Hypnotized” representing Danny Kirwan and Bob Welch’s contributions long before Fleetwood Mac made a commercial splash. Campbell gave listeners from the days of Peter Green and “Black Magic Woman” (resurrected earlier by Nicks) another bluesy surprise with the snarling “Oh Well,” while a tribute to his pal and former employer Tom Petty via “Free Fallin’” with Stevie singing earned a hefty appraisal.

Even with the front line’s massive appeal on their own, Fleetwood Mac mega-hits such as “Landslide,” “You Make Loving Fun,” “Go Your Own Way” and “Don’t Stop” called to mind exactly how valuable the group’s extensive songbook has become well beyond its main run throughout 1970s and ‘80s, alongside the forgotten ‘90s cut “All Over Again” popping up unexpectedly as the debut duet between the ladies to neatly tie up the night’s theme. Now in operation for more than 50 years, it’s probably safe to say that no matter what goes down between personnel or who winds up making the final roster during any given season, these Rock and Roll Hall of Famers will likely “never break the chain” as they “don’t stop thinking about tomorrow.”