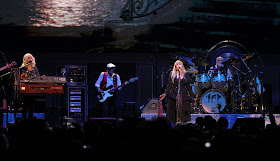 Despite various marriages, divorces, breakups, and makeups, the members of Fleetwood Mac have continually performed alongside one another for nearly half a century. Aside from a repertoire of legendary tunes, the band is perhaps most famous for its longevity. That longevity was briefly interrupted on April 9, 2018 when a RollingStone.com headline made waves across various the internet. “Fleetwood Mac Fires Lindsey Buckingham,” declared an article on the music mag’s website. Commenters on Facebook joked about how Buckingham’s departure would have been big news in 1979, not in 2018.

While those snarky commenters weren’t completely wrong, Buckingham’s unexpected termination still managed to shock fans. The prolific band—who managed to stay together for countless decades—was, at long last, losing a crucial piece of its never-ending puzzle. Would the group continue to prosper without Buckingham’s signature howl and refined guitar work? Only time would tell.

Not long after Buckingham’s dismissal, the band announced yet another tour. “An Evening With Fleetwood Mac” began this month, making its 12th stop in Milwaukee Sunday night at the freshly minted Fiserv Forum. Buckingham was replaced with not one, but two seasoned performers who were each given the task of trying to fill the big shoes that Buckingham left behind. Neil Finn (of Crowded House) took over Buckingham’s vocal duties, while Mike Campbell (of Tom Petty and the Heartbreakers) wielded a lead guitar.

The brand-new lineup started off the set with “The Chain,” a haunting track off of Rumours, perfect for Hallo-weekend. Right off the bat, audiences were given a little taste of both Finn and Campbell’s newfound contributions to the group. Finn admittedly seemed a little uneasy during the early parts of the set, but who wouldn’t be? Buckingham managed to set an extremely high standard, both for himself and for Fleetwood Mac; it speaks volumes that two musicians were hired to replace him.

Of course, Buckingham is a very important member of Fleetwood Mac…but frankly, he’s not exactly who people come to see. The ethereal goddess (and rumored witch) Stevie Nicks has long been the group’s showstopper, and that is definitely one aspect of the band that has remained unchanged. Her haunting voice sounds almost identical to the band’s early recordings; strong, slightly raspy and powerful as ever. It’s unlikely Nicks has ever succumbed to the temptation of auto-tuning her music. She sure as hell doesn’t need to.

Fleetwood Mac’s other leading lady, Christine McVie, has consistently remained one of the band’s most understated members. She immediately claimed her throne during “Little Lies,” a track on which the British chanteuse sings lead. During “Everywhere,” McVie stepped away from her keyboard and commanded center stage as Nicks stepped to the side. McVie left Fleetwood Mac in 1998 and only recently returned in 2014. Last night, it was clear the rest of the group was thankful to have the opportunity to perform alongside McVie once again.

One of the show’s few low points was an extremely gratuitous drum solo from Mick Fleetwood after a raucous rendition of “World Turning.” Yes, Fleetwood deserves his moment in the sun, and he is an extremely talented drummer. Regardless, his solo went on for far too long and was very obviously a self-indulgent addition to the otherwise engaging set. He yelled random hype words into a microphone as he drummed vigorously, eventually moving from the back of the stage to the front with a bongo drum slung around his shoulders.

After finishing up his act, Fleetwood took a moment to introduce the group to the massive audience. Aside from the main members of Mac, the lineup consisted of two backup singers, one backup percussionist, one backup guitarist, and one backup keyboardist. A grand total of 11 musicians made the Fiserv Forum stage their home for the night, taking the group’s arena-rock sound to the next level. “We are excited to have them join this crazy band called Fleetwood Mac,” Fleetwood said with a laugh.

Naturally, the most enchanting performances of the evening were those with Nicks on lead vocals. “Gypsy” and “Rhiannon,” two of the group’s most beloved tracks, were each highlights of the two-hour set. Another highlight was Nicks’ and Finn’s teamwork on a stripped-down, acoustic version of “Don’t Dream It’s Over.” It’s seriously unlikely that anyone listening to Crowded House in the mid-’80s would have ever guessed Finn would one day be a Fleetwood Mac stand in, but hey, stranger things have happened.

After performing a generous 19-song set, Fleetwood Mac finally stepped away from the stage. The band began its encore with a heartfelt performance of Tom Petty’s signature “Free Fallin’.” The crowd went berserk immediately after hearing the iconic intro. The sweet tribute was accompanied by a slideshow of Petty, who apparently took hundreds of photos with Stevie Nicks over the course of his career. Considering Nicks’ and Petty’s impressive track record, it may have been even more impressive to hear “Stop Draggin’ My Heart Around” or another collaboration between the two artists. But when Nicks howled, “I wanna write his name in the sky,” there was not a dry eye in the, uh, forum.

“Don’t Stop,” another legendary ditty off Rumors, was very appropriately saved for the encore. “Yesterday’s gone…oh, don’t you look back,” the band harmonized with a twinge of bittersweetness. Buckingham’s name was not uttered once throughout the entire set, but perhaps it didn’t need to be. Considering most of Fleetwood Mac’s members are in their 70s, it’s hard to imagine a next “era” for the legendary group. But if their 2018 track record is indicative of anything, it’s unlikely they’ll be retiring any time soon.

And thank God for that.