The Hall of Famers were revitalized by two new replacements. 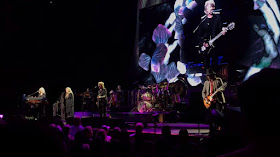 
The elephant wasn’t in the room but you sensed his presence all night long anyway.

No, guitarist/singer/producer Lindsey Buckingham got kicked out of Fleetwood Mac this year, but it was obvious who was getting under Stevie Nicks’ skin when she came out of her trippy, enigmatic dance during “Gold Dust Woman” Monday night at Xcel Energy Center in St. Paul.

Talk about shattering your illusions of Fleetwood Mac.

Fleetwood Mac without Lindsey Buckingham is sort of like the Twins without Joe Mauer. He’s been there forever, right? The band, like the baseball team and Mauer, existed before Buckingham joined in 1975 and still carries on without him.

In their 10th show since booting Buckingham, Fleetwood Mac took a while to find its footing. Oddly enough, it was a cover that sparked Nicks and the rest of the band. Neil Finn, who along with Mike Campbell has replaced Buckingham, was reprising his hit from Split Enz, “I Got You,” and Nicks was relishing vocalizing as if she was in her Los Angeles mansion singing along to MTV in 1982.

Then it was time for “Rhiannon,” perhaps the Steviest of Nicks songs, and she became Stevie Nicks, all bewitching mystery, dangling scarves, shiny beads and mesmerizing vocals. Her voice was clear, she seemed focused and, for a rarity in Fleetwood Mac, relaxed. Refreshed, too.

Nicks and the band — the veterans range in age from 70 to 75 — seemed revitalized by the addition of Finn and Campbell of Tom Petty & the Heartbreakers, who represent guitarists No. 11 and 12 in Fleetwood Mac’s long history. (No, the unofficial record for replacements in one band is held by Spinal Tap’s drum seat. Google it.)

The new players helped to open up the Big Mac catalog, which, of course, dates back to the band’s beginning in 1967 in England. That gave Campbell, 68, an underappreciated guitarist in his Petty days, an opportunity to exercise his blues vocabulary, painting “Black Magic Woman” with a heavier brush than Carlos Santana used on his famous cover version and turning “Oh Well” into something swell if you welcome a Led Zeppelin feel.

The crowd of nearly 14,000 was thrilled to hear Campbell’s signature work on Petty’s “Free Fallin,” which featured the liberating lead vocals of Nicks, the world’s biggest Petty fan. New Zealand’s Finn, 60, who has a Paul McCartney vibe about him, did a lovely understated reading of “Don’t Dream It’s Over,” the 1986 hit by his other band, Crowded House. With his assertive tenor, he was a good surrogate for Buckingham’s vocals on such Mac favorites as “Second Hand News” and “Go Your Own Way.”

His acoustic guitar was all the reassurance Nicks needed to turn “Landslide” — her reflections about the fear of moving on from a relationship because, as she sings, she’d built her life around him — into one of the highlights of the 140-minute concert. As she has often done in the Twin Cities, she dedicated the song to her “one and only husband,” Kim Anderson, who was in attendance with his girlfriend of 30 years. “Minneapolis, St. Paul — quite a place in my heart forever,” she proclaimed as the fans cheered loud and long.

Always a crowd favorite, this tune seemed to have new resonance on this night. It was so obvious that she’s moved on from the elephant in the room.