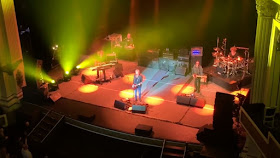 Lindsey Buckingham is making headlines with his lawsuit against Fleetwood Mac for firing him, and for launching his own solo tour at the same time as his former bandmates, who are out on the road with new members Neil Finn (of Crowded House) on guitar and vocals and Mike Campbell (from Tom Petty and the Heartbreakers) on guitar.

But judging from his Oct. 13 show at San Diego’s historic Spreckels Theater, the man who, for more than 40 years, reimagined the venerable British blues band into a power-pop hit machine (with a little help from musical partner Stevie Nicks, of course) has emerged a compelling and commanding solo performer. Buckingham’s flair for innovation and delicious finger-picking guitar work are more than worthy of a turn in the spotlight.

Indeed, Buckingham needed neither the band nor Christine McVie, with whom he toured last year, to shine. Much like Brian Wilson, one of his idols, the essence of Lindsey Buckingham is easier to digest, and appreciate, when he’s out on stage on his own.

There, the artistry of his songwriting truly becomes apparent. The carefully crafted pop songs, the often unconventional structures and clever melodies—it’s a musical show-and-tell from an artist who throughout his career has been stretching the limits of conventional pop music, as he did on Fleetwood Mac’s famed Tusk, for which he was soundly criticized for straying from the “formula” perfected on predecessor Rumours, which went on to sell more than 40 million copies.

Touring for just two months in support of the newly issued compilation Solo Anthology – The Best of Lindsey Buckingham, Buckingham from the stage of the Spreckels performed more than 20 songs spanning his career, from his early days with Fleetwood Mac through half a dozen solo albums. It made for an eclectic, and electric, evening of musical expressionism. Buckingham and his first-rate band had the crowd on its feet as he sang Mac hits like “Go Your Own Way,” “Never Going Back Again” and “I’m So Afraid.”

His solo rendition of “Tusk” surprised in that it sounded remarkably like the record. So did all his versions of the Fleetwood Mac hits he played, and one was left with the feeling that his firing is more the band’s loss than anyone else’s.

But the evening’s true delight was the assortment of songs from his various solo efforts. Fondly remembered hits like 1981’s mischievous “Trouble,” the feel-good 1983 “Holiday Road,” written for the National Lampoon’s Vacation movies, and 1984’s vindictive “Go Insane” were clear crowd pleasers.

So was the 1984 near-hit “Slow Dancing,” which he’d reportedly never performed live before this tour.

Some of the newer, less familiar songs showed Buckingham’s musical progression over the years, a path oddly similar to Brian Wilson’s, who also pushed further and further against conventional boundaries in his body of post-Beach Boys work. “In Our Time,” from 2011’s  Seeds We Sow, is a remarkable song that defies categorization and truly showcases the brilliance and dexterity of Buckingham’s signature finger-picking. And “Treason,” the final song of Buckingham’s three-tune encore, from 2008’s Gift of Screws, is a haunting tale of betrayal and redemption that could easily have been directed at his former bandmates in Fleetwood Mac:


Videos at the link below