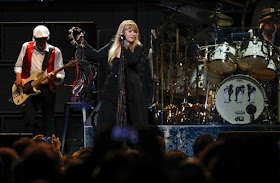 Fleetwood Mac paid tribute to its varied incarnations at San Jose’s SAP Center on Wednesday, Nov. 21, and despite a few surprising flubs, the storied rockers commanded the crowd as if they never broke the chain.

The band, which survived five decades of shifts in sound, personnel and personalities, performed an almost 2½-hour set rich in the soft-rock standards that defined its commercial peak in the 1970s and ’80s, as well as blues tunes from its formative years and a few obscurities, during its 50th anniversary tour stop.

It was a set that regardless of which Fleetwood Mac era fans came to see, hit every note. The show may not have won over those who miss singer-guitarist Lindsey Buckingham, recently replaced in a move that divided classic rock lovers, but the tour that is likely to please longtime followers planning to catch Fleetwood Mac when the band plays Sacramento’s Golden 1 Center on Friday, Nov. 23, and Oakland’s Oracle Arena on Sunday, Nov. 25.

The San Jose concert was particularly special for singer Stevie Nicks, who turned 70 this year but hasn’t ditched her shawls or heels. A homecoming of sorts, Nicks took several moments to give the South Bay city a proper shout-out. Born in Phoenix, she attended San Jose State University and made some of her first recordings in the Bay Area.

“It’s pretty darn good to be back in my own specific and very special hood,” she said. “This is where it all started, and I had to take a minute to let you know that.”

Nicks, who has done decades of shows worldwide with the band as well as solo, said she was a bit nervous to be back in the Bay Area and even forgot the lyrics at one point to “Landslide.” Whether it was nerves or overfamiliarity with one of her most popular songs with the band, it was an odd moment from a normally polished singer.

“What’s happening? … I’ve lost the key,” Nicks admitted in the midst the song, which she dedicated to longtime friends (including one who used to drive her to the College of San Mateo for “two solid years, back and forth”).

“This is my home, so I can do this,” she laughed off. “Seriously, I’m so nervous I’m never coming back here!

“I’m kidding. I will always come back,” she assured the crowd. “This is when you know, after 70 years, that you still get this nervous when you sing a song for people that you love.”

With longtime singer-guitarist Buckingham fired amid reports of major bad blood with Nicks, his former lover he met when the two attended Menlo-Atherton High School, the band has been touring with Neil Finn of Crowded House and Mike Campbell of Tom Petty’s band, the Heartbreakers. Though neither had the manic magic that made Buckingham unstoppable onstage, they provided competent interpretations of Buckingham’s standards, with Finn handling the lead vocal in “Second Hand News” and “Monday Morning,” and Campbell tackling the frenetic guitar leads on “The Chain” and “Go Your Own Way.”

The band did a deep dive into its blues catalog, with Nicks providing a feminist spin singing “Black Magic Woman,” a haunting psychedelic gem later popularized by Santana; Finn dusting off “Tell Me All the Things You Do,” a melodic nugget from Danny Kirwan, a Fleetwood Mac member from 1968 to 1972 who died this year; and Campbell taking the spotlight on “Oh Well,” a powerful hard rock hybrid.

Nicks, even more of a focal point for the band with Buckingham out of the picture, gave the crowd what it wanted with “Dreams,” “Rhiannon” and “Gypsy.” She paid tribute to Petty, her frequent collaborator who died last year, with a spirited version of “Free Fallin’” featuring projected images of the two together and Petty with the Heartbreakers over the years.

Finn, whose solo career hasn’t received the attention it deserves after he created moody, melodic pop with Crowded House and Split Enz, took a deserved spotlight with a cover of “Don’t Dream It’s Over.” It was an unusual choice for a Fleetwood Mac concert, but it was well received — especially when Nicks joined in on the chorus.

Drummer Mick Fleetwood, still a solid player at 71 and is probably the member who’s worked harder than everyone to keep Fleetwood Mac together over the years, did his standard wild-man solo. Bassist John McVie kept his usual low profile but provided a solid foundation for the band. And keyboardist Christine McVie, who rejoined the band in 2014 after a lengthy semi-retirement, proved to be a grounding force with her smoky vocals on the mid-tempo staples “Little Lies,” “Isn’t It Midnight” and ”Everywhere.” She closed the evening with a duet with Nicks for the band’s third encore song, “All Over Again.” (The deep cut is off the band’s poorly received 1995 “Time” album and is a song that only Fleetwood Mac’s die-hard fans remember — if at all.)

McVie’s collaboration with Buckingham last year on an album of new material was such a pleasant surprise that it’s disappointing to know that Fleetwood Mac has no intentions of recording new songs again. That could take the sting away for Buckingham fans who resent hearing the new guys covering songs he made famous. But as long as some form of Fleetwood Mac remains intact covering the band’s classic catalog, this incarnation passes the test. 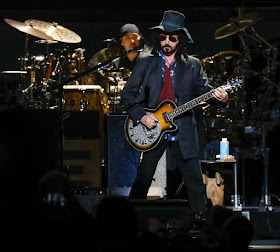 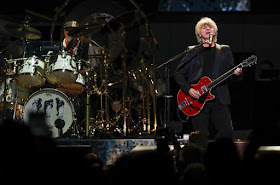 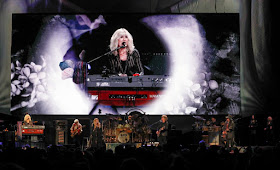