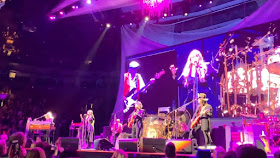 The musical soap opera known as Fleetwood Mac rolled into Toronto yet again for another tour but this time without its most important member Lindsey Buckingham whom they fired earlier this year.

Let us begin by saying we are huge Fleetwood Mac fans. We flew out to New Jersey to see the show from front row center and do a VIP meet and greet with Mick Fleetwood. We flew to London’s O2 arena to see them front row again, we saw them at an invite only party at CES in Las Vegas, and the list goes on. Please click on one of the links above to understand the type of coverage we provide.

Also please note that we paid for the ticket for tonight’s show (and every single other Fleetwood Mac show we ever wrote about, except for the invite only show mentioned above) – no free reviewer tickets here to sway our observations. In fact I think all music reviews should state if the ticket was bought or given for free from the promoter or the band.

News broke that Lindsey Buckingham is no longer part of Fleetwood Mac earlier this year, and this tour was announced right after that. While logic would dictate that this tour would not sell many tickets or that perhaps they would be discounted to something reasonable like $100, neither assumption proved to be true. It seems that many people had no idea that Buckingham would not be there and thus jumped in eagerly and it also seems that the band name is much bigger than the individual artists.

There is a trend in that most classic era rock bands tour these days without the golden era vocalists ( some quick example of bands we have seen recently – Yes without Anderson, Journey without Perry, Styx without DeYoung, Foreigner without Gramm, and even AC/DC without Johnson). For whatever reason  (9 times out of 10 it is because of $$$), the lead singer (and usually main songwriter), is not there. However Fleewood Mac without Buckingham is a much larger shock than anything above because he is also the main guitarist and the creative genius of everything the band made when they ruled the airwaves.

The really good news is that Buckingham is doing his own local show on Friday November 16th in a much more intimate setting in Kitchener’s Centre In The Square. As at the time of this writing a 20th row ticket in the small theater setting will cost about $80 to see the solo Buckingham show. On the other hand, tickets were still available for Fleetwood Mac at the Scotiabank Arena on the night of the show, and a lovely seat in the back of the 300 sections (i.e. where you so high up and so far back that feel you are watching people watching a concert) was selling for $211.25. Clearly the Kitchener show is a much better choice and yet it is not even sold out yet – the power of the band name proven once again.

Enough preamble… I am sure you know where we are going with this article.

Continue on to the full review