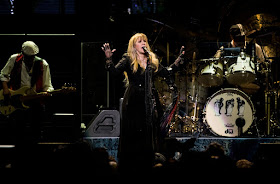 If you were to make a short list of bands that shaped music during the post-Vietnam era of the 1970s, Fleetwood Mac is arguably in the top five. While Led Zeppelin, Pink Floyd, The Eagles and a host of others were easily holding down the rock ‘n’ roll, Fleetwood Mac found massive success on the pop end of the spectrum.

Having just acquired the romantically involved duo of Stevie Nicks and Lindsey Buckingham, Mick Fleetwood’s band hit pay dirt with their 1975 self-titled album and topped it with 1977’s Rumours, which is one of the best-selling records of all time. Despite the commercial success, the band’s 50-year history of strife and dysfunctional behavior has resulted in numerous lineup changes. That tradition continued last year when Buckingham was fired just before the group embarked on their tour. With big shoes to fill, Fleetwood and company went big by enlisting the help of Mike Campbell (lead guitar of Tom Petty and the Heartbreakers) and Neil Finn (lead vocals/guitar of Crowded House).

Thursday night, the newly revamped Fleetwood Mac lineup played to a sold-out American Airlines Center. Mac kicked off the show with longtime opener “The Chain.” Mick Fleetwood’s kick drum thumping in the darkness, joined by that signature guitar intro and reaching a crescendo with those big Fleetwood Mac harmonies belting, “Listen to the wind blow…” started the night off perfectly.

From there the group hit the gas pedal on their long list of hits. Christine McVie (keys/vocals) followed up with “Little Lies” then Nicks (vocals) with “Dreams.” Both women’s voices have weathered over the years, but no question they can still bring it, even into their 70s.

Through the first half of the show, the older crowd stayed mostly on their feet, but the instant the band kicked off “World Turning,” there was a massive exodus up the aisles. It was uncanny but obviously planned. The band left the stage for a breather, save Mick Fleetwood, who proceeded into a 10-minute percussion interlude that went on too long but allowed folks to empty their bladders and refuel for the back half.

Everyone rallied, with Fleetwood Mac offering “Black Magic Woman” and Stevie Nicks absolutely shining on “Gypsy.” Despite all the great moments, a true highlight of the night was Finn’s acoustic rendition of “Don’t Dream It’s Over,” which drew out the flashlights and had the crowd singing along. Nicks joined Finn for the last verse before the two proceeded into “Landslide.” A one-two punch featuring two of the most beautiful songs written in the last 50 years is hard to top.

But they still finished strong as Nicks danced in an almost trance-like state during “Gold Dust Woman” and Finn absolutely owned “Go Your Own Way.” The first encore was phenomenal. Former Heartbreaker Campbell broke out the Rickenbacker and led a group homage to Petty with “Free Fallin’” as images of their deceased friend appeared on the giant screen behind them. The night ended with encores “Don’t Stop” and a rare Nicks/McVie duet, “All Over Again.”