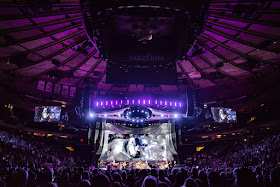 Fleetwood Mac‘s tour hit NYC on Monday night for their first of two shows at Madison Square Garden since 2015. It’s a slightly different lineup than it was then, since the band ousted Lindsey Buckingham and replaced him with Crowded House’s Neil Finn and Heartbreakers guitarist Mike Campbell. Like they’ve been doing on this tour, Monday’s MSG show opened with the trifecta of “The Chain” (with Finn taking Buckingham’s vocal part), “Little Lies” and “Dreams.”  Their set also included such Mac classics as “Rhiannon,” “Gypsy,” “Everywhere,” “Landslide,” “Gold Dust Woman,” “Go Your Own Way,” “Don’t Stop” and more.

Also like they’ve been doing on this tour, they give each of their new members a chance to shine, with Neil playing Crowded House’s hit “Don’t Dream It’s Over” and covering Tom Petty’s “Free Fallin'” as a tribute with images of Tom (some with Stevie) projected during the song. They also played “Black Magic Woman,” which original member Peter Green wrote for Fleetwood Mac (it was on 1969’s English Rose) before Santana turned it into a hit. Check out the setlist below and pictures from MSG are in the gallery above.

Stevie, Christine, Mick and the rest of Fleetwood Mac play NJ’s Prudential Center on Wednesday and return to the Garden on March 18 (tickets to both are still available), while Stevie will be inducted into the Rock And Roll Hall of Fame at Barclays Center on March 29. 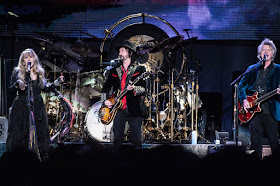