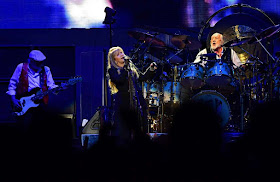 ALBANY –Typically, when a classic rock band has reformed and is in its twilight years, the members put aside their differences and egos for one or two last big money-earning tours. They certainly don't fire the person responsible for some of their most beloved and iconic fare. But that's exactly what Fleetwood Mac did last year when it fired singer and guitarist Lindsey Buckingham, replacing him with Crowded House frontman Neil Finn and Mike Campbell, lead guitarist from Tom Petty and the Heartbreakers.

For those steeped in the band's tempestuous history, it seemed like another dramatic continuation of the oft-contentious relationship of Buckingham and his ex-flame, co-lead singer and tambourine player Stevie Nicks. But it also begged the question: how would Fleetwood Mac proceed without one of its essential voices?


If Wednesday night's performance at the Times Union Center is any indicator, the answer is quite well. And maybe inadvertently Buckingham foresaw this out come when he wrote in his rebound- from-Nicks rocker "Second Hand News," "I know there's nothing to say/Someone's taken my place."

Fleetwood Mac performed this song expertly on Wednesday, with Neil Finn handling the lead vocals. Finn sounded fantastic, a pitch-perfect replacement. It felt like an ideal song choice for his voice and range, but also a not-so-subtle way to note that Nicks and the rest of the band has capably moved on from Buckingham.

On what is likely the band's last stop in the Capital Region, Fleetwood Mac busted out the hits and a few deep cuts in a set that ran a shade over two hours. The end result was a sturdy performance that sent the consistently enthusiastic, near sell-out audience home happy.

The evening started off with a triptych of crowd-pleasing classics –"The Chain," "Little Lies" and "Dreams." On the latter, Nicks' performance and delivery felt a bit perfunctory, but after "Second Hand News" she seemed to pick up the pace.

On "Black Magic Woman," Nicks played the part of a bluesy chanteuse, really digging into the tune and belting it out in a fashion atypical of her normal delivery. Campbell showed off his chops and looked particularly pleased to riff behind Christine McVie while she churned out some bluesy piano licks. This performance also established a pattern; Nicks would go gung ho on lead vocals, chill out in the background for a couple of songs and then pick up the pace again.

After "Black Magic Woman," McVie offered up a sublime "Everywhere," the band jettisoning the atmospheric '80s production of the studio version for an almost funky groove. Nicks followed this up with a lively "Rhiannon," then took a break while drummer Mick Fleetwood played an enthusiastic and strong drum solo that belied the fact he's a septuagenarian.

After Finn and Nicks dueted on the Crowded House hit "Don't Dream it's Over," which helped to make that song feel like more than just filler while Fleetwood took a breather, came the evening's highlight. "Landslide" was gorgeous, Nicks really digging in and emoting while Finn and Campbell tastefully backed her.

The main set ended with a huge audience singalong on "Go Your Own Way" that showcased the ability of Finn, Nicks and McVie to harmonize together seamlessly. For the first song in the encore, Campbell and Nicks led Fleetwood Mac through a tribute to their departed friend Tom Petty on a cover of "Free Fallin'."Nicks particularly was into it, singing the lyrics with more verve than is her typical style, while Campbell's attention was focused on the gallery of Petty images being displayed on the screen behind them.

While the evening ended with the somewhat unexceptional McVie-Nicks duet "All Over Again," the real end for the audience came with "Don't Stop." It likely wasn't intended to serve as a profound statement on the current state of affairs for the group, but as the crowd sang along loudly and Fleetwood Mac began to bring another successful show on another successful tour to a close, that "Yesterday's gone" line felt a bit like the current lineup waving goodbye to a still-bitter Buckingham. 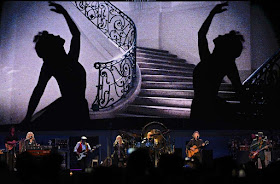 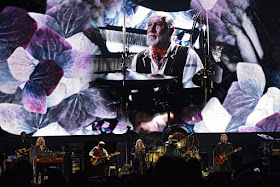