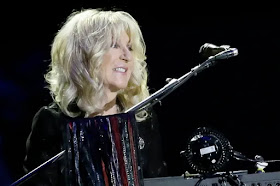 ATLANTIC CITY — The Fleetwood Mac concert at Boardwalk Hall on Saturday night began with “The Chain.”

That entrancing vamp from 1977’s Rumours, which started the two-hour, sold-out show, is the only song written together by all five members of the band’s classic lineup: Mick Fleetwood, John McVie, Christine McVie, Stevie Nicks, and Lindsey Buckingham.

Over the years, the song has become a signature of the enduring bond of the hit-making soft-rock act that’s been no stranger to drama, surviving multiple breakups of couples within the group and of the band itself, only to come back together to with a mantra of “never break the chain.”

This version of Fleetwood Mac, however, has one key link missing. That would be Buckingham, the guitarist, singer and arranger, who was tossed last year in a dispute that Nicks has said was simply about scheduling: The band was ready to begin rehearsals for a global tour last June, and Buckingham wanted to wait five months before getting started.

The solution was to replace, with not one but two guys, Buckingham, arguably the principal architect of the massive success the band achieved after he and Nicks joined on New Year’s Eve 1974. (It was founded in 1967 as a straightforward blues-rock band under the leadership of Peter Green.)

The substitutes in the already road-tested unit -- who have been touring since October and are scheduled to play the Wells Fargo Center in Philadelphia on March 22 and April 5 -- are Neil Finn, the New Zealand guitarist known for leading Split Enz and Crowded House, and Mike Campbell, longtime guitarist for Tom Petty and the Heartbreakers.


Neither is a slouch. Each adds significant musicality. Finn, a genial presence with a shock of gray hair, is a gifted singer and accomplished songwriter. He brought to the band Crowded House’s sublime “Don’t Dream It’s Over” — sung as a lovely, delicate duet with Nicks, and preceded by a welcoming introduction by Fleetwood, who spoke of the band’s “strange arc.”

Calling it “a song about unity,” Finn hinted at the sumptuous ballad’s topicality during the Trump presidency: “They come to build a wall between us / We know that they won’t win.”

Campbell, in a floppy hat and fringed Davy Crockett jacket, came to play the blues. Before Buckingham’s arrival — and when he temporarily left the band in the late 1980s — the rhythm section of gregarious drummer Fleetwood and silent bassist John McVie backed up numerous axmen, including Green, Jeremy Spencer, Bob Welch, Billy Burnette, and Rick Vito.

Engaged by a new gig after the death of Petty, his lifelong musical partner, Campbell’s playing was sharp and intelligent, and he got to enjoy himself when the set list visited the pre-Buckingham era. He took the lead vocal on the snarling “Oh Well,” dating to 1969, and came to Christine McVie’s side to play off her bluesy piano fills on “Black Magic Woman,” the Santana hit that was originally a Mac song, sung by Nicks from a clever, script-flipping feminist perspective.

And during the encore, Campbell joined with his new bandmates — and the five other auxiliary musicians onstage — for a Petty tribute with “Free Fallin’,” a disappointing (if crowd-pleasing) choice considering Nicks’ duets with Petty on songs like “Insider” and “Stop Draggin’ My Heart Around.”

Buckingham, who suffered damage to his vocal cords during open heart surgery this year, has called the new Mac “a cover band.” That’s harsh and overly simplistic. Fleetwood Mac isn’t all about him and his replacements.

Musically, it’s equally about Fleetwood and John McVie’s locked-in rhythm section and Christine McVie as the band’s most undervalued asset, a smoky-voiced singer of many of the band’s most enticing and vulnerable songs: “Hold Me,” “Say You Love Me,” “You Make Loving Fun.”

And as popular entertainment, this version of Mac is about Nicks. Wearing her usual cloaks and scarves and shawls, and making her trademark spin at the end of “Gypsy,” Nicks — who will be inducted into the Rock and Roll Hall of Fame as a solo artist this month — is the maternal goddess figure who got the crowd on its feet, from date-night boomer couples to selfie-snapping millennial women to the foghorn-voiced dude behind me singing along to “Landslide.”

If she was the one who decided that the band should go forward without her ex from long ago, she’s certainly been vindicated commercially. The tour is doing boffo business all over the country.

But Buckingham is missed. It’s not a problem on songs like “Gold Dust Woman,” even though it dragged a bit, or “Little Lies,” as those are principally vocal vehicles for Nicks and Christine McVie. Finn and Campbell can handle the vocal and guitar parts admirably, and the band sounds excellent. At multiple junctures, however, Finn needed to be at center stage, shouldering the burden of Buckingham songs like “Second Hand News” and “Monday Morning.”

At those times — or when he’s called upon to look at Nicks and trade vocals at spots where Buckingham’s fraught history with her would create heightened drama and a titillating frisson — Finn seems to be out of place through no fault of his own. Why is he up there? Because somebody had to be. 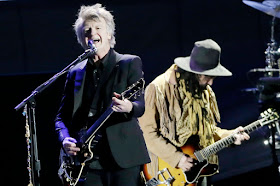 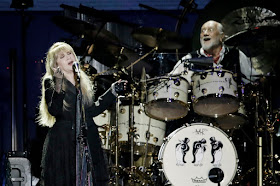