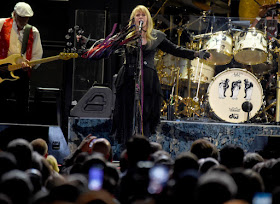 Fleetwood Mac began a stunning Sunday TD Garden show with “The Chain.” Yes, the band known as much for infighting as perfect pop welcomed the packed house by repeatedly shouting the lyrics “Keep us together” without irony.

Much like “The Chain,” the band draws energy from collecting chaos and synthesizing it into a sublime sound. Whatever the drama, whatever eccentric talents fill the lineup, Fleetwood Mac comes together to make magic. It sounds damn corny, but “Rhiannon,” “Little Lies,” “Landslide” and all that delightful AM gold dazzled the fans.

Now does Fleetwood Mac get to call itself Fleetwood Mac without Lindsey Buckingham? Devotees spent an enormous, possibly inappropriate amount of time arguing about this last year when the band announced they would tour without their longtime singer and guitarist — the tour plays the Garden again tonight. That debate never concerned me. What I wondered was: Would the Mac be any good without Buckingham? The short answer: Absolutely.


Founders drummer Mick Fleetwood and bassist John McVie and singers and key songwriters Christine McVie and Stevie Nicks smartly filled the immense hole left by Buckingham with two aces. Crowded House leader Neil Finn stepped in with vocals and rhythm guitar. Former Heartbreaker Mike Campbell made the lead guitar parts distinctly his while nodding to Buckingham’s melodic lines — you could hear echoes of “Runnin’ Down a Dream” in “The Chain.”

Buckingham can’t be replaced, but carrying on without him opened up wonderful possibilities. Along with the expected greatest hits from 1975 to 1987, the set included a pair of oldies. Nicks reclaimed the 1968 nugget “Black Magic Woman,” a Mac original recorded two years before Santana’s version, with Campbell adding some vintage psychedelic grooves. For ’69’s “Oh Well,” Campbell smashed everything from Zeppelin to Hendrix to the Allman Brothers into his guitar work.

Finn’s back catalog got some love when he joined Nicks on a tender, acoustic reading of Crowded House’s “Don’t Dream It’s Over,” and the band celebrated the loss of friend Tom Petty with Nicks leading a nearly-20,000-strong sing-along of “Free Fallin’.”

Of course, the crowd came for the classics. Acting like a group 40 years younger, Mac turned “Gold Dust Woman” into a dreamy extended jam with Nicks riffing on lyrics, stalking the stage draped in a golden, gossamer shawl and the audience going bonkers. Christine McVie and Finn harmonized like old friends on a buoyant “Hold Me.” And Fleetwood — somehow managing to be a frontman from behind the kit — played a gonzo,10-minute drum solo while bellowing into a microphone, “Are you with me?” and “Are you ready to release the hounds?”

As an astounded 20-something behind me yelled to her friend, “He’s 71 years old! I can’t believe this!”

I get it. It’s hard to believe a band that started as a modest British blues act would become masters of Top 40 pop and then still thrill arenas 50 years in. 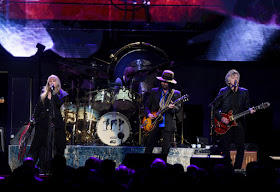 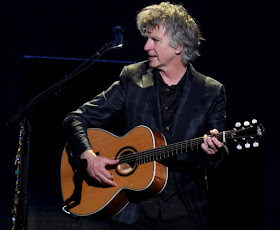 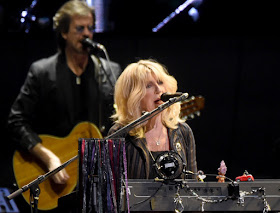 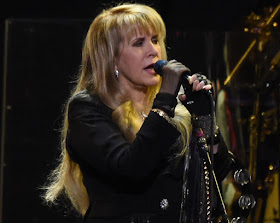