They fixed it in the mix.

Stevie opened the show when they taped the special and it looks like all her performances will air and she will open the show when it airs tonight on HBO. 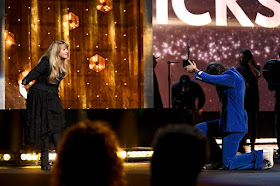 The result: a tighter, better-sounding version of the bone-wearying actual ceremony held in March in Brooklyn, New York, at the Barclays Center. The program premieres at 8 p.m. Saturday, April 27, on the cable network, and will re-air throughout the month.

But to understand how we got there, take yourself to Brooklyn and pretend that you are the person in charge of that as-it-happens event. Consider:

This is a live show that honors seven acts, with the accompanying egos that exist despite what the press releases and online bios say. Who goes on first? Who goes on last? Who wants to go on first and who wants to go on last? Who gets the preshow sound check? Who just has to plug ‘n’ play? How much of the allotted chunk of time do you give one act over another? And how do you expedite the changeover from one act to the next, getting all the instruments set up, miked, etc?

This time around, those acts are the Cure, Def Leppard, Janet Jackson, Radiohead, Roxy Music and the Zombies, the Class of 2019 for this year’s Rock & Roll Hall of Fame. Now, I can get around the egos of the artists and their management just by listing them alphabetically, as I’ve done here. Good luck doing it in real life, in real time.

The first thought is that you should get everything in within the five hours or so that’s allotted for a show that begins at 7 p.m. Somebody gets paid to make the decisions, so whoever that was in New York decided that the order would be Nicks, Radiohead, Roxy Music, the Cure, Jackson, the Zombies and Def Leppard.

At the surface, that made pretty good sense, as Radiohead and Jackson opted against performing. That meant structuring it this way – and with a killer opening set from Nicks, the first woman to be twice inducted into the Rock Hall – it should have worked out just fine because it left plenty of time for stagehands and instrument techs to do their thing.

So what if it took a full five hours-plus, with all the inductions, performances and a final jam with Mott the Hoople’s Ian Hunter fronting a show-ending all-star jam to “All the Young Dudes?” It only seemed like 10 hours.

Now, let’s redo it for TV. That job fell to director-producer Alex Coletti from HBO and the editors under him, and frankly, they succeeded beyond anyone’s expectations.

The first and best move was cutting that five hours to three. Yep, three. And trust me as one who was present for those original five-plus hours, nothing worthwhile ended up on the cutting room floor.

Nicks got her 37 minutes, by far the largest chunk of time. None of the other inductees got more than 30 for their closeups, Mr. DeMille. But again, the only thing you missed (but didn’t really) was drag-on speechifying so common in awards shows.

Coletti’s other move was something you couldn’t really determine till after the fact: Putting the show in order of quality. Yes, Nicks opened the show, so yes, her position was a necessary lock. But it was also far superior to some of her latest gigs with her usual band, Fleetwood Mac, especially with an appearance by Eagle and Hall of Famer Don Henley on her hit, “Leather and Lace.”

But by far, though, the performance of the night from opening note to final round of applause came from Robert Smith and the Cure. Best music, best vocals, best best.

So Coletti re-structured the show so that the order of appearance was Nicks, the Cure, Jackson (who was probably the most boring presence onstage the entire night), Roxy Music, Radiohead, the Zombies and Def Leppard.

And it all took away from the real tedium of a pure awards show and turned it into a performance. I can’t say that the three hours flew by, but it didn’t feel like a root canal.

Ah, and that fix it in the mix thing? One of the issues many had was in the somewhat shrill tones of Zombies lead singer Colin Blunstone during the 1960s’ band’s big hits “She’s Not There” and “Tell Her No.”

Now in his 70s, Blunstone no longer has the voice of an 18-year-old (do any of us?). But he knows to treat his vocal chords as an athlete would treat his body, which means warming up. Sitting in an audience for four hours as he did, there was no way he’d be able to hit all those melodious notes from five decades ago.

But Coletti and his engineers were able make the right adjustments. Perfect? No. But not nearly as shrill as it was live, which turned a respectable performance into a respectful one.

Fix it in the mix, indeed. 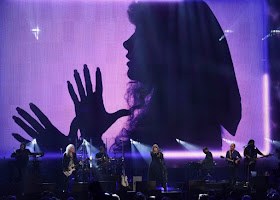