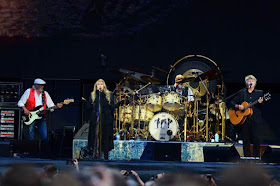 Some fans praised the “absolutely fantastic” and “incredible” event from parts of Wembley Stadium, but others complained that the band's music sounded “terrible” due to the audio set-up.

The legendary band performed in the capital as part of their 28-date tour around the world.

The Pretenders also performed as the band's supporting act and Harry Styles from One Direction made a surprise appearance on Tuesday, even bringing along his mother to the gig.

Stevie Nicks dedicated the song Landslide to the One Direction star, saying: "He’s really a gentleman, sweet and talented and boy that appeals to me.”

However, hundreds of the 90,000 people in the crowd, who paid up to £150 for a ticket, are demanding a refund after claiming they were unable to hear “anything but echo”.

Sue Allen tweeted on Wednesday morning after the show: “Shocking sound quality at #FleetwoodMac at Wembley last night. Left early. V disappointed and will be pursuing a refund."

Another fan who said the bought three tickets costing £51.70 tweeted that: “the sound system was terrible. It was one of the most expensive concerts I have ever been too and am so upset at how bad the sound was.

“I do feel under the circumstances that some sort of refund is due.”

On Sunday Jules Swain posted a video which appeared to support their claims of poor sound at the show, saying “You need to fix the sound!!! Can’t tell a word they’re singing.”

“At Wembley – can’t hear anything but echo - £300 on tickets – you are awesome but sadly your sound people have massively let you down,” one twitter user said.

Helen Murray said: “Sound system at Sunday concern in block 122 row 39 was DREADFUL. The echo was painful and completely spoilt the show.”

According to fans, Live Nation, the concert’s organisers, are refusing to offer refunds.

Despite the sound issues, many people celebrated their experience on Twitter, with one user saying: “Best experience of my life to date! @fleetwoodmac were absolutely fantastic.”

Another wrote: “Fleetwood Mac last night @wembleystadium were absolutely incredible. Have to say when Stevie Nicks began singing I got literal goosebumps. Such a special evening thank you."