Fleetwood Mac roll back the years with RDS stunner
BY: STUART CLARK
Hotpress 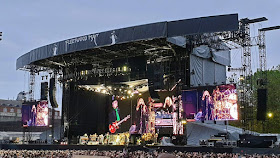 Despite the Lindsey Buckingham-shaped hole on stage, the band were in serious crowd-pleasing mood, says Stuart Clark

When they last played Dublin in 2015, it was obvious from the body language and the yawning space between them on stage that all was not well between Lindsey Buckingham and the rest of Fleetwood Mac. Even so, it was still one hell of a shock when his services were dispensed with before this latest lap of the world.

I know of quite a few conscientious objectors who aren't in the RDS tonight to see whether Tom Petty's former Heartbreakers lieutenant Mike Campbell and Crowded House's Neil Finn can between them fill the Lindsey-shaped hole to the right of the drum-riser. The answer is they can’t – nobody can - but let us not forget that four of the people who magicked up the likes of Fleetwood Mac, Rumours, Tusk, Mirage and Tango In The Night are still present and correct.

Opening with a rambunctious version of ‘The Chain’ – the Mac have always kicked considerably more ass live than in the studio – and following it up with the close harmony swoon of ‘Little Lies’, it’s evident that the reconfigured band are in serious crowd-pleasing mood tonight.

Occupying as she does that middle ground between Homer’s The Odyssey and Tolkien’s The Lord Of The Rings, I was a bit taken aback to see Stevie Nicks wandering past the Permanent TSB on Grafton Street on Wednesday afternoon. Tonight, though, in front of a seriously sold-out Showgrounds she is once again not quite of this world. Her first solo turn is ‘Dreams’, a song that despite being played approximately every 27.2 minutes on classic hits radio has lost none of its spellbinding allure.

Neil Finn takes care of the vocal heavy lifting for the first time on 'Second Hand News', and proves himself to be more than able for the task. Dublin being a lot colder at this time of year than L.A., he's wrapped up in a Rupert The Bear-style green scarf. The crowd's cockles are warmed by the rendition of 'Black Magic Woman', which features some fabulous interplay between Finn and Campbell - who's one hell of a cool dude guitarist. Quite how much he can see from beneath the heavy duty shades he's wearing is debatable. The song also serves as a reminder of how fine a keys player the perma-smiling Christine McVie is. She struggles to hit the high notes on the following 'Everywhere', but hey...

Nicks is at her sublime best again on ‘Rhiannon’, with the "Would you stay if she promised you heaven?” line a seductively delivered tease that puts goosepimples on this writer’s goosepimples.

The first call and response of the show comes when Mick Fleetwood, sounding uncannily like Chas Smash at the start of 'One Step Beyond', commandeers 'World Turning'. His exhortations to "unleash the hounds" as a bongo is pulverised don't go unheeded. The greatest showman drummer of all time? He's definitely there or thereabouts.

A reminder of Neil Finn’s other job comes halfway through when, following a Mick Fleetwood big up, he strums the opening notes of 'Don't Dream It's Over'. When Stevie joins in, it's genuinely gobsmacking. She dedicates 'Landslide' to "my good friend Joe Elliott who's from here... well, I hope he is." She's sort of right. Anyway, it's easily her best performance of the night.

There's laughter from the band as they fluff the intro to 'Hold Me': the execution thereafter is pure pop perfection. Also falling into that category is 'Go Your Own Way', inadvertently the cheeriest break-up song ever, which survives not being sung by its author Lindsey Buckingham.

The double-whammy encore of ‘Freefallin'' – somewhere up above us Mr. Petty is shaking a serious leg – and ‘Don’t Stop’, another song that still sounds factory fresh after all these years, bring the curtain down on what, by even Fleetwood Mac’s high standards, is a stunning show.