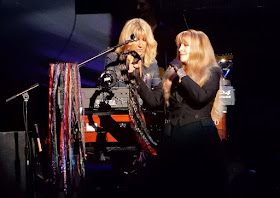 Elegant and enthusiastic, the Anglo-American group celebrated with emotion fifty years before 45,000 fans. Mosquito was in the plain of Werchter to witness what looked like the last Belgian concert of a rock legend.

Despite the qualifying match of the Red Devils, despite the threats of the storm Miguel, more than 45,000 Belgians were present this Saturday at Werchter Boutique. This 2019 edition featured more musical aperitifs ( The Pretenders ) or less (the others) digests before welcoming Fleetwood Mac for the second European leg of his tour fiftieth anniversary and for, no doubt also, his last appearance in Belgium.

Fleetwood Mac on stage in 2019 is an enthusiastic group whose timeless "classic rock" repertoire always lights up with one or the other surprise. Fleetwood Mac, after fifty years of a story worthy of a soap with all that it includes excesses, betrayals, ruptures and reconciliations, it is a formation that brings together today the elite. Either the two irremovable founding members who gave their name to the group (71-year-old drummer Mick "Fleetwood", 73-year-old bassist John "Mac" Vie), English keyboardist / singer Christine McVie, the cultured Stevie Nicks, the guitarist Mike Campbell (former right-hand man of Tom Petty and Heartbreakers member) and Neil Finn (leader of Crowded House). Yes, a band of rock stars accustomed to stadiums able to play everything with their eyes closed but who, as with the Stones or the side of the E Street Band, remember that to last you must also continue to live and enjoy.

Logically, Fleetwood Mac focuses his repertoire on his two albums that brought him glory. No less than five songs are taken from the LP "Fleetwood Mac" (1975) and seven are from the huge "Rumors" (1977) which, with its 40 million copies, remains one of the most popular albums. sold out of history. The highlight of Werchter's two-hour concert is without hesitation any of Stevie Nicks' poignant interpretation of Rihannon . Covered with dark-colored shawls and a black dress of pity, Stevie Nicks puts all her emotion into this " song about a Welsh witch " as she presented it in the 70s. Behind, on the screens, wild horses gallop in the waves while the guitars Mike Campbell and Neil Finn duel. And to add more in the format " postcard" , it will be specified that it is pile-pile at the end of Rihannon, that the dark night fell on Werchter. Very very strong…

Rihannon arrives at the first hour of the show. A perfect first hour where the pieces are linked without taking into account the times: The Chain in intro; the MTV Little Lies hit Nick echoes his accomplice - especially moved this Saturday night - Christine McVie; Everywhere sung at the center of the stage by the same Christine McVie, Gipsy performed by a weightless Stevie Nicks or Second Hand News , a break song from "Rumors". The double album "Tusk" is, however, not visited. Probably because it symbolizes too much the investment of the guitarist / producer Lindsey Buckingham, a great absentee of this anniversary tour. On the other hand, Fleetwood Mac unearths the Black Magic Woman of its blues period. Written by Peter Green in 1968 and popularized by Santana on her first album released a year later, Black Magic Woman is now "the point of view of a woman" in the voice of Stevie Nicks who is completely embracing this prayer hippie evoking a mesmerizing female creature " who has the power to make blind" .

Fleetwood Mac version 2019 is not immune to clichés and tributes. Mick Fleetwood's long drum solo works well in a plain but you can do without it. Tube among the tubes, Go Your Own Way is one of the few titles that seems to run in autopilot, but Fleetwood Mac had to play it. The Crowded House Neil Finn has the opportunity to remember his science pop on the ballad for lighters and smartphone Do not Dream Is Over, included in a setlist that also includes a salute to the late Tom Petty with his cover of Free Fallin sublimated a new once by Stevie Nicks. Other highlights of this " back to seventies" evening include Christine McVie's You Make Lovin Fun and the "Cocaine" song by "Rumors" Gold Dust Woman . A very nice evening. 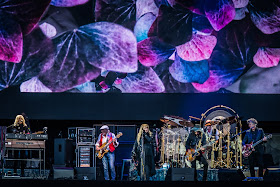 Werchter Boutique 2019 was all about Fleetwood Mac. The band therefore has a legendary status and appeals to both young and old. Werchter's meadow was not completely full, but that could not spoil the fun. About 45,000 music lovers enjoyed themselves and gave the best of themselves with the best that Belgium has to offer in terms of music, and of course with the classics of Fleetwood Mac. The headliner gave a firm set in which the hits were not missing, but the age also played a role. Musically everything had been worked out to perfection and so everyone went home with a satisfied feeling.

The band for which everyone had gone to Werchter Boutique was of course Fleetwood Mac . The group came to Belgium for the first time since the departure of Lindsey Buckingham. The Werchter meadow was therefore well filled, although there were still fifteen thousand tickets left. Fleetwood Mac appeals to both young and old, which led to a very diverse audience. Even the Golden Circle was well filled once the band climbed the stage.

We were promised two hours and a half of music; it was half an hour less. Fleetwood Mac did not put a damper on it and started off with “The Chain”. The audience immediately came along and once the fantastic bass hit it, every doubter had crossed the line. The band went along with "Little Lies" and the floating "Dreams". The tone was set, one hit after the other was fired. Nevertheless, the band then went looking for other sounds in their spectrum, after which the bluesy "Second Hand News" even got people dancing.

The two new members, Neil Finn and Mike Campbell, will certainly leave their mark on Fleetwood Mac. It is not easy to replace Buckingham, but Finn with his refined vocal work and Campbell with his brilliant guitar work did the job very well. The rest of the members are therefore no longer the youngest and you sometimes heard that in the vocals. This was particularly striking at McVie, which of course was a pity. Her voice was no longer powerful enough and as a result certain songs seemed a bit flat. Fortunately Mick Fleetwood still has all the power in him and we should have known that. An elongated drum solo during "World Turning" was ours and we are still not sure where the 71-year-old man got all that energy.

They also went back to the beginning of the band's career, with "Oh Well" as a small highlight. The guitars screamed and gave us strong ringing in the ears. It's good that we were able to recover afterwards with something calmer work through the cover of "Don't Dream It's Over" - very loudly sung - and of course the fantastic "Landslide". Here Nicks showed that her voice has only become rougher over the years, but that she still stands her ground as a front woman.

She went to the end of the set to dance and we saw that she genuinely enjoyed it. She told some nice anecdotes and so the line between audience and band only got smaller. Unfortunately, after all these ballads, the set also fell into an elongated fold and it was the search for highlights. You saw the audience look more on their cell phones, or at the sky, where planes passed. Not ideal. Fortunately there was suddenly "Go Your Own Way" and everyone was back in the story.

The band then surprisingly left the stage, because they had to play a good 45 minutes. Naturally they came back and with "Free Fallin" they brought another wonderful, emotional ode to Tom Petty. The set was completed with “Don't Stop”; so they stopped effectively, and so everyone went home tired but satisfied. Everyone has already forgotten that half an hour that they played too little, because two hours turned out to be more than enough. The band thanked everyone extensively and it seemed as if they were saying goodbye, but that will only be for a while.

Fleetwood Mac is a legendary band that can play one hit after the other, but at Werchter Boutique they also opted for less obvious songs, which served as a playful set. Tight solos, excellent musical work and of course the singing along ensured that this evening will be unforgettable for everyone. We especially noticed that the slightly lesser world hits caused a dip and left the set a bit slugged. Luckily everything was straightened out at the end, but the band is no longer the youngest one and unfortunately you could see that at times - a John McVie who was almost asleep on his bass for example. Fortunately, there is the new generation of guitar players who are bringing the band back to a fresh level and the set continued to fascinate for two hours.