If you are in the UK on September 20th, cancel your plans! 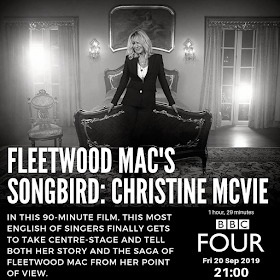 Christine McVie is undoubtedly the longest-serving female band member of any of the enduring rock ‘n’ roll acts that emerged from the 1960s. While she has never fronted Fleetwood Mac, preferring to align herself with ‘the boys’ in the rhythm section whom she first joined 50 years ago, Christine is their most successful singer-songwriter. Her hits include ‘Over My Head’, ‘Don’t Stop’ and ‘Everywhere’.

After massive global success in both the late 1970s and mid-1980s, Christine left the band in the late 1990s, quitting California and living in semi-retirement in Kent, only to rejoin the band in 2014. In this 90-minute film, this most English of singers finally gets to take centre-stage and tell both her story and the saga of Fleetwood Mac from her point of view.

Fleetwood Mac – A Musical History - Showing at 20.00
BBC retrospective on Fleetwood Mac, fellow musicians, journalists and fans celebrate the music of Fleetwood Mac with a selection of their best-loved songs.

Brian Johnson’s Life on the Road with Mick Fleetwood - Showing at 21.00