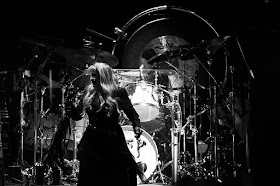 Considering the 11 talented musicians packed on the Rogers stage Tuesday night you wouldn’t think that was possible, but it’s true. The half-century-old group can still put on an entertaining and polished show, though the gap where guitarist, songwriter, and musical spark plug Lindsey Buckingham normally stands is very evident in the retooled Mac.

The band itself obviously knows this, which is why they brought in some heavy hitters to up the supergroup quotient. Neil Finn (of Crowded House and Split Enz) and Mike Campbell (Tom Petty and the Heartbreakers) split Buckingham duties, Campbell unspooling stinging solos, the affable and energetic Finn providing supportive guitar work and vocals.

Each got a few moments in the spotlight to shine on their own, Finn reaching all the way back to 1980 for I Got You and then later sharing the mic with Nicks on a lovely, understated Don’t Dream It’s Over. He also helmed an incendiary version of Go Your Own Way, while Campbell stepped up for Oh Well and led the band in tribute to his old boss with a Nicks-sung version of Free Fallin’. It was not unlike those Ringo Starr tours of the ’90s where the Beatles’ drummer brought along a cavalcade of celebrity musicians to take a turn at the mic for their best known songs.

Husky-voiced Stevie Nicks had to dip under the high notes a few times, understandable given that she’s edging in on 72. She still has the back catalog of perfect pop jams and mystic hippie moves to draw from, spinning during Gypsy and Dreams, giving herself over to full interpretative dance on psych-jam Gold Dust Woman. The drawn out Black Magic Woman was given a pronoun swap; after years of constant radio rotation Landslide was every bit as gorgeous and fragile as you would have expected, just as Rhiannon maintained the necessary sultry, mysterious vibe.

Christine McVie mostly kept behind her bank of keyboards, harmonizing with Nicks, laying down choice lines where necessary. A not-so-secret weapon in the Mac arsenal, McVie has a greatest hits collection of her own with songs like Say You Love Me, You Make Loving Fun, Little Lies, and Everywhere. While at times she seemed a bit rushed in her phrasing she’s still a strong vocal and musical presence.

John McVie was his usual rock steady self to the side of the drum riser, providing supple, solid bass, while Fleetwood was a bit of a ham on his extended drum solo, shouting through a frenetic duet with percussionist Taku Hirano then grabbing a hand drum and wandering out front to continue the musical dialogue.

That’s also the point at which the band slowed down their momentum, stalling on the long sequence of hits to chat, pull out a few deep cuts, strip down to component parts. Nicks apologized for the double cancellation from last spring and 2018, Fleetwood wryly acknowledged what a strange and wonderful beast his band is. Nobody mentioned the gap that is Lindsey Buckingham.

And why should they? Holding pattern Fleetwood Mac is still Fleetwood Mac, so while the current edition feels a little bit ad hoc they’re still capable of delivering pure sonic pleasure when put to the test. 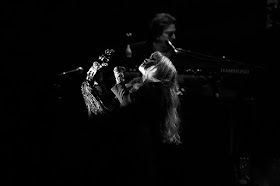 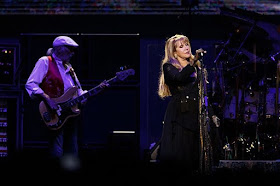 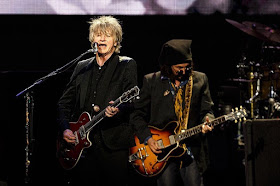 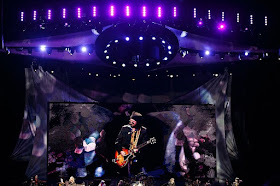