Fleetwood Mac have been named the ultimate Glastonbury headline act by Spotify listeners. 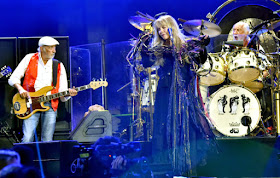 The annual music festival was forced to cancel its 2020 event - which was due to take place this weekend - due to the ongoing coronavirus pandemic, and as festival goers around the country lament the lack of live music, Spotify have unveiled the list of the ultimate Glastonbury line-up.

The streaming service had the UK public vote for the artists they'd most like to see take to the stage at the iconic festival, and have revealed 'The Chain' hitmakers Fleetwood Mac came out on top as the most sought after festival headliner.

The band were closely followed by legendary musician Sir Elton John and Led Zeppelin, indicating a theme of nostalgia which is currently sweeping the nation. - MSN