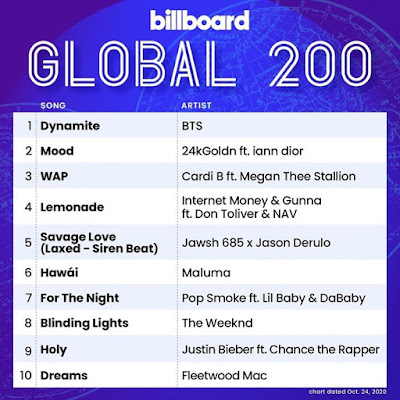 Billboard published the Top 10 Global Tracks and "Dreams" bounds from No. 20 to No. 10 on the Global 200, sparked by its TikTok-fueled revival.

The Billboard Global 200 chart is inclusive of worldwide data and ranks songs based on streaming and sales activity culled from more than 200 territories around the world, as compiled by Nielsen Music/MRC Data.

"Dreams" vaults 20-10, with 27.3 million streams (up 36%) and 33,000 downloads sold (up 20%) globally. The classic, which was the top-selling song worldwide in the tracking week, is benefiting from the viral TikTok video in which Idahoan Nathan Apodaca rides his longboard while drinking a bottle of Ocean Spray Cran-Raspberry juice, backed by the Stevie Nicks-penned song; the band's Mick Fleetwood and Nicks have since created their own tribute clips. - BILLBOARD