Stevie Nicks, she reflects on mortality 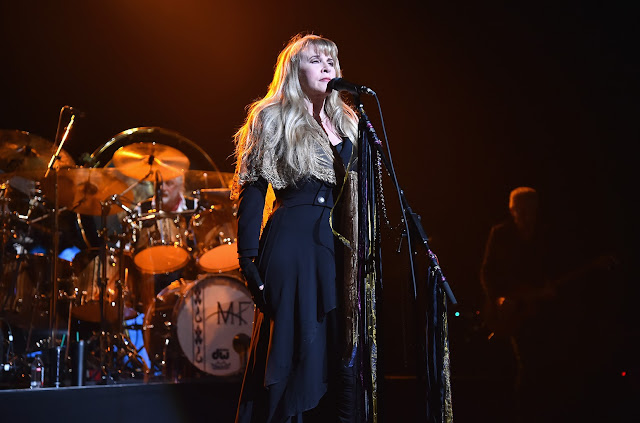 There are certain moments you dream (pun intended ) of as a journalist. Spending 90 minutes on the phone on a Friday night with twice-inducted Rock And Roll Hall Of Famer Stevie Nicks is definitely one of those.

Over the course of the wide-ranging conversation, which will run in three parts, due to the remarkable length, we touched upon a number of subjects, from her brilliant new single, "Show Them The Way" to her influences.

At one point we joked about the viral success of "Dreams." Thanks to the superb original TikTok video from Nathan Apodaca, the song was top five on streaming charts from that day, sandwiched between six or seven Van Halen songs following the death of guitar legend Eddie Van Halen a few days before our conversation.

Of course, Nicks knew Van Halen, who she said she had written a tribute to (as of this publishing it has not been shared). And that set off a conversation about other recent losses, including her friends like Tom Petty and Prince.

Here in part one with Stevie Nicks, she reflects on mortality.

Steve Baltin: "Dreams" is on the charts today sandwiched between several Van Halen songs, which should rightly be in the top 10.

Stevie Nicks: I wrote something about Eddie that I'm gonna put on my website cause I knew him quite a while ago. So when you know somebody fairly well for several years it doesn't have to be just the few years. He was always so nice to me and such a nice person. I really liked him besides the fact he was such an awesome guitar player. But that's really too bad, that's a big loss. One more person that I didn't want to lose.

Baltin: Is there music from friends who have passed you find it hard to listen to?

Nicks: It's mostly Tom's music and I love Tom's music. I listen to Tom Petty Radio [on Sirius XM] and it makes me feel like he's still alive because he spent a lot of time on that radio station to the point where the rest of the Heartbreakers were like, "So you missed your calling. You just really wanted to be a disc jockey." And he did so much work on it they've been able to totally keep the Tom Petty radio station alive and I'm so happy about that because to me I hear him and it's like I'm talking to him while he's talking to us. I forget that he's gone because of that station. And I'm so happy that he actually did piss everybody off and spent a lot of time putting that all together for all of us because it's so special. But I did want to tell you one thing my dad said to me once. He died in 2005. In the last couple of years of his life, at one point he said to me, "All my friends are dead." And I was struck dumb when he said that cause I actually knew a lot of his friends. But then of course there were a lot of his friends that I didn't know or didn't know anything about cause he was 22 years older than me so there were a lot of friends in my father's life that I never even knew. Same with all of us, we don't really know everything about our parents. And the fact is when he said that to me I thought, "That's the worst thing I ever heard." And just in a really quite, somber voice, "All of my friends are dead." I'm like, "I don't want to hear that, that makes me so sad for you." So when my dad died there was a part of me that went, "Farewell, my friend, farewell, my father. Now you're gonna be with all your friends who you obviously were missing so much. And I'm glad you made that final journey and you're up there with them now." When he said that I didn't even get it. And now I'm starting to really understand because just in the time of the loss of Prince, the loss of Tom Petty, the loss of Glenn Frey, the loss of Eddie Van Halen, it's like I knew all these people. And then you can kind of go to the generation that was 15, 20 years older than me and think, "They already went through this. Every generation it goes through." And the people that live to be really old, like hopefully me, there will be a time where a lot of people will be gone. And I certainly never expected for Prince and Tom Petty to be gone in 2020.

Baltin: I don't think anyone did. But I love what you said about the radio station. And it's funny because when you think back on his relationship with Jim Ladd and "The Last DJ," he did give a foreshadowing he wanted to be a DJ.

Nicks: Well, he never did tell me that and I never even knew he was working on that. But then when he died all the rest of the Heartbreakers told me all of their stories cause they'd be like, "Tom, let's record something." And he'd be like, "I'm going to the station." And he wanted to be there by himself so he could make up all those names. And I just laugh because he had such a goofy sense of humor, dry, but goofy. And it's all there. And I just go, "This is so great that he actually did this." It's too bad all of us aren't obsessed enough with radio we can't go out and actually do what he did because it really had made a difference I think for everybody who misses Tom Petty. You just turn on that station and listen to him, it's like he's back. If anything it proves we need to try to appreciate our friends more than we probably do because we're not gonna have them forever.

Baltin: Is there one Tom song you wish you had written or one that speaks to you the most?

Nicks: That would be a hard question for me because there are so many. I really love "Don't Come Around Here No More," which came basically from Dave Stewart to me. Dave Stewart wrote the track for that for me, for the timbre, timbre was the word he used, of my voice. And then we went into the studio with Jimmy Iovine, me and Dave and Jimmy. Then we started working on it and at some point Jimmy said, "We should call Tom." I said, "Yeah, he can come and help us." So Tom came down and by this time it was one o'clock in the morning and for whatever of my reasons, me who stays up all night every night, I was tired. So I went home to get some rest and said I'd try to be in the next afternoon earlier than usual. So when I came back the next night I walked in and Jimmy was like, "Okay, listen to this." Tom was there, Dave was there, they pushed play and it was the entire song, done, finished. And I was furious, I was so pissed off because I said, "It's done." And Tom says, "Oh, you can change any of it you want." "Thanks, yeah, I'm gonna change your, 'I don't feel you anymore, don't darken my door.' First of all, Tom, I bow to your greatness. And it's amazing. You did an amazing job for this f**king awesome song." Then I said to Dave, "I'm sorry, Dave Stewart that it's now not gonna be my song. It's gonna be Tom Petty's song, the world is gonna love it and you did a great job." And I said to Jimmy, "How could you let this happen?" And I fired him. I was so angry. And then Jimmy sent me a final mix of it and I thought, "This has just become my favorite Tom Petty song. So it really was a collaboration between him and Dave Stewart, who wrote the track. So the track was really as it is now. When Dave does a track for you it's like done. Same with Mike Campbell. They give you the finished track almost. Then it became my favorite song to do with Tom on stage. So as difficult as it was that I didn't get to write it because Dave did write, "Don't come around here no more," just that one sentence. He usually does that. Like "In Your Dreams," he wrote a song for me, just the track. But he did write "Everybody loves you, but you're so alone." So he gives you this little seed of an idea and then you take it from there. And when I listen to "Don't Come Around Here No More" I always think there's a little bit of my vocals because Sharon [Celani] and I did do some vocals that first night on that chorus. But there are so many. If I got a list of all of Tom's songs, there are a million songs he wrote I'd like to actually record and may sometime take four or five of his songs and record them. But I would trade all that just to have him come back.