"This song is a prayer for people to unite" - Stevie Nicks

On edge of 72, Stevie Nicks just wants to sing a song live 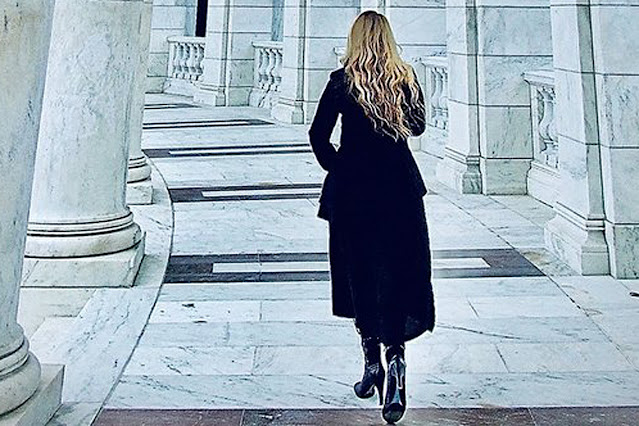 The rock icon is at her Los Angeles home, where she’s been cooped up since December after wrapping the “An Evening with Fleetwood Mac” tour. She arrived there at first to relax after spending a year on the road and to celebrate the holidays. But then the coronavirus pandemic hit.

Stuck at the house is both good and bad for Nicks. The good news? Her house is a creative oasis where all her favorite musical instruments live. It’s where she spent a year recording her 2011 album “In Your Dreams” with Dave Stewart and Glen Ballard.

Her current 10-month stint — and counting — at home even fueled her to record the new single “Show Them the Way,” out on Friday.

“It’s beautiful,” she says after singing the song’s chorus at the end of a 90-minute-plus interview, where Nicks excitedly discussed everything from her admiration for late icons and pals Tom Petty and Prince to her relationships with Harry Styles and Beyoncé.

The bad news? Nicks is 72 and doesn’t want to be homebound when she prefers to be singing live on the road.

“This pandemic is more than just a pandemic for me. This is stealing what I consider to be my last youthful years,” Nicks told The Associated Press. “I don’t have just 10 years to hang around and wait for this thing to go away. I have places to go, people to sing for, another album to make. With every day that goes by, it’s like taking this time away from me. That I think is the hardest thing for me.”

“I have a lot of friends that are 60 and they’re going, ‘Oh I’m so old, I’m 60.’ I’m like, ‘You know what, the violins of the world are playing for you. You’re going to really appreciate 60 when you turn 72,’” she continued. “I don’t feel like the whole world is really getting behind getting this to go away. I feel like people are just thinking it really is just magically going away. All it takes is a few people that don’t wear a mask to spread. Just let one person catch it from you and there it goes — it’s like the never-ending story. That worries me because I’m going, ’Will it really be gone by the end of 2021?

“Will it be safe next year for us to walk into Madison Square Garden?’ I don’t know that it will,” she said.

Nicks is hoping to satisfy fans she would typically see in-person on tour with the new concert film “Stevie Nicks 24 Karat Gold The Concert.” It was recorded over two nights during her 2016-17 “24 Karat Gold” tour and will be available at select theaters and drive-ins on Oct. 21 and 25. A CD and digital album of the concert will be released Oct. 30.

“As we started to understand that this COVID thing was not a joke, I started going to myself, ‘Well, you know what? This may be the closest to going to a big, big concert that’s actually not from 1977 that is new,’” Nicks said. “It’s brand new and it’s fantastic.”

The only time she left her West Coast home was to edit the film in Chicago. She took a private jet to the home on a golf course that had been vacant for some time, spending a month there and editing down hours of footage to create the 140-minute film.

“They can’t do it without me. I won’t allow it,” Nicks said. “We got it all done. It was really fun. We were really safe.”

But at the end of the trip, Nicks tripped in the snow and fractured her knee: “I was like screaming as I went through the air and saw the gravel driveway coming toward my face and just made a quick turn. So, I didn’t fall face down and caught myself. Because of my strong, tambourine arms, I was able to stop myself from crashing even worse. It was a really bad fall, but it’s OK.

“It’s had a hard time getting better,” she continued. “I hurt this knee really bad, my left knee, before, years ago. I had been dealing with it and fixed it. ...I had just really gotten it to be to the place where it was totally better, then I fractured it. So now it’s almost better,” she said.

Apart from producing her concert film and recording “Show Them the Way,” Nicks has been busy in the home where she’s been creative in the past: “Another famous rock ‘n’ roll star, who will not be mentioned, sent me a song that he wants me to sing on,” she revealed.

Though “Show Them the Way” arrives Friday, Nicks said the song came to her in a dream in 2008 when Barack Obama and Hillary Clinton were competing for the Democratic Party nomination for president. In the dream Nicks is performing at a political benefit where attendees include Dr. Martin Luther King Jr., John Lennon, John Lewis, John F. Kennedy and Bobby Kennedy.

“I didn’t really realize that until just the last few days. The chorus was written a week or so later,” she continued.