Before Stevie and Lindsey, Peter Green was the soul of Fleetwood Mac. Just ask Mick Fleetwood 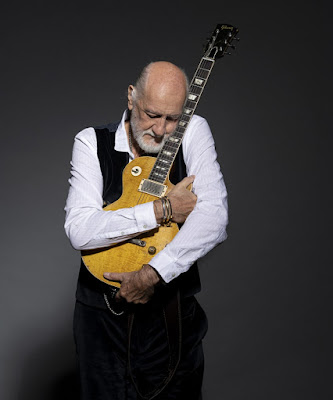 Before he founded Fleetwood Mac, guitarist Peter Green replaced Eric Clapton in John Mayall’s Bluesbreakers, a band that was a way station for many of the best white British blues musicians of the 1960s. In the Bluesbreakers, where he earned the nickname “The Green God,” Green wrote “The Supernatural,” an instrumental showcase in which, midway, he halts his stately pace and resolutely holds a single note for 4½ bars. Other guitarists wanted to prove how fast they could play; Green was proud to show how slowly he could.

“It’s a perfect description of Peter,” says drummer Mick Fleetwood, 73, a former Bluesbreaker who has been, for 53 years, the only constant original member of Fleetwood Mac. “That’s Peter’s adage that I inherited from him as a musician and as a friend: Less is more. Say something with one note, or with a perfect vibrato.”

There are musicians who rate Green ahead of Clapton, Jimmy Page and Jeff Beck as the greatest British blues guitarist of the ’60s, due to his singular combination of tone, touch and taste. But Green isn’t as well known as his contemporaries, an injustice Fleetwood has often tried to correct, most recently with an all-star tribute concert.

Green’s career and life are mysteries no one has solved. Fleetwood Mac debuted in August 1967 and within two years became the biggest band in Europe, outselling the Beatles and the Rolling Stones. A second guitarist, Jeremy Spencer, also wrote and sang, and Danny Kirwan soon joined and did the same, but the group’s success was chiefly due to Green’s songs, which varied between melancholy and menacing: “Black Magic Woman,” the U.K. No. 1 hit “Albatross,” “Man of the World,” “Need Your Love So Bad” and “Oh Well.”

In 1970, Green, who like many musicians had been taking LSD, came to believe that playing for money was immoral. He started wearing a white robe onstage (it made him look like Rasputin), gave away much of his money and tried to persuade the band to do the same. He quit and was later diagnosed with schizophrenia and spent time in mental institutions. His treatments included electroconvulsive therapy, during which doctors use electric currents to spark a brain seizure, and also narcotizing drugs. He moved to Israel and lived on a kibbutz, then returned to England, where he worked as a hospital orderly and a cemetery gardener. He was sent to prison after a 1976 incident in which he threatened to shoot his accountant. (In some accounts of this incident, Green is said to have demanded the accountant stop sending him money.)

Green toured and recorded now and then, but never again at a high level. “I just zombie around,” he told an interviewer in 1994, adding that his prescription meds made him fall asleep. His remarkable peak lasted less than three years, and some of his songs are known better for cover versions, notably Santana’s “Black Magic Woman,” Tom Petty and the Heartbreakers’ “Oh Well” and Judas Priest’s version of “The Green Manalishi (With the Two Prong Crown),” the haunted hard-rock song that was Green’s finale with Fleetwood Mac.

In the decades since Green left, the Fleetwood Mac lineup has changed regularly, which Fleetwood — sitting for a video conference from the kitchen of his home in Hawaii, wearing a black shirt and Kangol, and aviator glasses — calls “one of the most magical things about the band — the insanity of it.” And even after Stevie Nicks and Lindsey Buckingham joined and Fleetwood Mac became massive stars with the 1977 release of “Rumours,” Fleetwood kept reminding people that the band began with Peter Green. 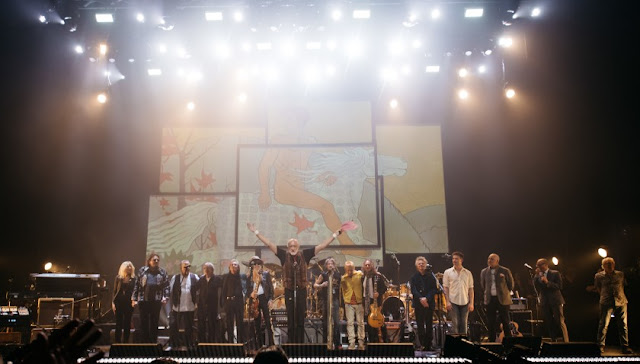 His latest tribute is Mick Fleetwood and Friends Celebrate the Music of Peter Green and the Early Years of Fleetwood Mac, a concert that took place at the London Palladium on Feb. 25, 2020; the concert will stream at nugs.net starting April 24, followed the next week by Blu-ray, CD and LP releases. The guest performers include Christine McVie of Fleetwood Mac, Pete Townshend of the Who, Steven Tyler of Aerosmith, Noel Gallagher of Oasis, Billy Gibbons of ZZ Top, Kirk Hammett of Metallica and David Gilmour of Pink Floyd.

When I ask Fleetwood how long it took him to organize the concert, he replies, only half-jokingly, “most of my adult life, since Peter left the band.” For decades, he’s carried the responsibility of keeping Green’s name alive.

The tribute concert, like Fleetwood Mac’s career, thrived on drama and fortuitousness. The Who singer Roger Daltrey was part of the lineup but had to drop out — “he was on a love boat tour or something,” Fleetwood says cheekily. (Daltrey was headlining the Rock Legends cruise.) Zak Starkey, who’d been drumming with the Who, suggested guitarist Townshend to replace Daltrey. Townshend called Fleetwood and followed up with a profanely insistent letter, declaring his love for early Mac. In the show, he plays “Station Man,” which Kirwan wrote after Green left, and demonstrates how he nicked the chord progression to write the Who’s “Won’t Get Fooled Again.”

Fleetwood’s niece, the model Lily Donaldson, mentioned the concert to a friend who’s married to Gallagher, who wanted to participate. When Fleetwood asked him what possible connection there was between Oasis and Fleetwood Mac, Gallagher explained that they’d often played Green‘s songs at soundchecks. “Everyone on that stage had a magical reason for being there,” Fleetwood tells me.

When Fleetwood cold-called Gilmour, the guitarist expressed a hesitation rooted in awe: “I don’t know whether I’m able to touch Peter’s playing,” he said. Fleetwood called again, closer to when rehearsals were set to begin, and Gilmour said, “I’m ready,” Fleetwood recalls. Gilmour played “Oh Well (Part Two),” which no incarnation of Fleetwood Mac has ever played live.

Two musicians are conspicuously absent from the lineup. One is Fleetwood Mac bassist John McVie. Why wasn’t he there? “Because he’s a Scotsman,” Fleetwood answers with a laugh, “and they’re known to be very thrifty.” He hints that McVie wasn’t willing to perform for the amount of money he was offered.

Also missing from the tribute was Green himself. Fleetwood had reserved a table for his friend in case he decided to come, but had resigned himself to what he calls “Peter’s wayward decision-making process.” The drummer didn’t want to know if Green was coming (“I might have come unglued because it was a big night for me”), and the guitarist didn’t show.

Green was born Peter Alan Greenbaum in 1946, shortly before anti-Jewish demonstrations and riots broke out across Britain. The guitarist had “a relatively unpleasant childhood, being Jewish in London,” Fleetwood notes. “He felt ostracized and abused as a young chap.” Green gravitated to the blues, the drummer hypothesizes, because it was music about being in pain.

Fleetwood and John McVie (the duo for whom Green named the band) blame Green’s mental health issues on a pair of manipulative German aristocrats who invited the band to a party at their mansion outside Munich in 1970 and slipped LSD into their drinks. “I went on a trip and never came back,” Green once said.

It’s unclear whether psychedelic drugs can trigger schizophrenia, says Teri Krebs, a researcher who co-authored a 2013 science journal article exploring the link between hallucinogens and mental health. “There are certainly case reports of LSD triggering mental illness, but there’s not good evidence that people who use psychedelics have a higher rate of mental illness,” she says. Because there hasn’t been a randomized control trial of psychedelics and schizophrenia, and because some studies found that the use of psychedelics exacerbated the symptoms of schizophrenics, it’s possible that LSD has a negative effect on mental health for some people, Krebs says.

Regardless of the cause, Green was irreversibly changed for the worse. When he played a New York City club in 1998, Jon Pareles of the New York Times said Green “sounded out of practice, with his small voice wandering off the beat and his guitar solos losing their narrative concentration.” In the 2009 documentary “Man of the World: The Peter Green Story,” former manager Clifford Davis describes feeling heartbroken when he shared a meal with an unkempt Green, who had inches-long fingernails and ate with his hands.

“That’s not what it’s about, to me,” Fleetwood counters. “It’s not about long fingernails and being lost. I need that to be made very clear. It’s about the respect for what this person, and the band at the time, represented.”

Fleetwood was in touch with Green over the years and tried to coax him into a larger return to music. Around 2002 (Fleetwood isn’t sure of the year), Green agreed to play a concert with him at the Royal Albert Hall. “Right at the last minute, he pulled the plug,” the drummer says. “I didn’t often know how his mind worked. And I felt let down, in truth.

“He had no regard for who and what he had been or could be musically anymore. At that point, I realized I needed to let go. It’s painful, but it pays no dividends to you or the person you’re trying to hang on to.”

But Fleetwood has hung on to his band, even through the departures and returns of the three great songwriters behind “Rumours” and other albums. Buckingham left in 1987 and Nicks quit four years later, though both returned in 1997. Soon after, Christine McVie retired, then rejoined in 2014.

In the most recent iteration of insanity, Fleetwood Mac toured in 2018 without Buckingham, who said in interviews that his ex flame Nicks had given the band a him-or-me ultimatum.

“I don’t look at it like that,” says Fleetwood, the band’s cheerful diplomat. “Stevie was very unhappy. It was not an ultimatum — it was about taking a breath. Two people have walked away from each other, like Liz Taylor and Richard Burton. I understand both people. Lindsey would say, ‘You’re piggy in the middle, Mick.’”

But Fleetwood is the temperate, determined piggy who’s kept one of music’s greatest and most interesting bands alive through a panoply of guitarists, keyboardists, singers, tours and dramatics. So who will be in Fleetwood Mac the next time the band tours?

“I hope the whole f— lot of them!” he says with a laugh. “I’m not done. And if I can get John McVie off his boat, he’s not done either!

“My English pipe dream, sitting on top of a mushroom, would be that everyone who’s ever played in Fleetwood Mac would be welcome. That’s what would drive me, because this is all about a collective.”

After an hourlong conversation with Fleetwood, it’s clear he doesn’t just believe Fleetwood Mac began as Peter Green’s band; in some ways, it’s still Green’s band, because it continued in the spirit Green, as patriarch, established.

“Peter called the band Fleetwood Mac to make sure it wasn’t all about him. He could have been King Tut and said, ‘Do as you’re told.’ We did everything as a partnership. It set the stage to allow the survival of this crazy band.”