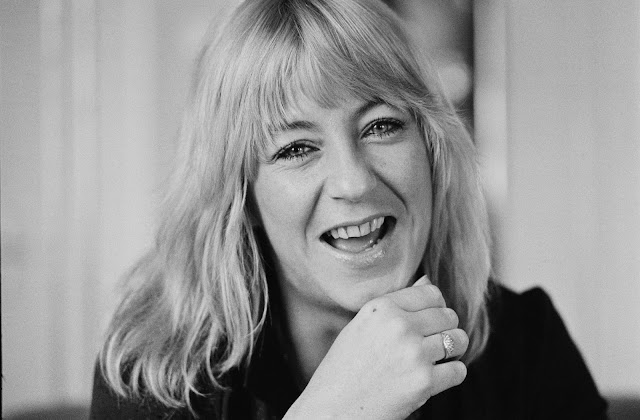 When I was in seventh grade, Christine McVie was like a friend, probably because I had so few. It was one of those cruel middle school mysteries: I left sixth grade popular, the first girl in class to wear eyeliner, but when I returned from summer vacation, everything had changed. As I learned of loneliness, music took on a new role. My mother must have given me the CD—Rumours with a “u”—the spelling of it alone excited me. I used to play it every morning before school, while my cat Mr. Moon walked between my legs. A late bloomer, my hands were still childlike; I can see them in front of me now, red nail polish chipped at the edges, pulling the CD out of the sleeve and placing it in my parent’s old boombox. At first, I listened to Fleetwood Mac because no one else in my class did and, while I also secretly knew the words to the entire Christina Aguilera album, I preferred the feeling of rejecting whatever it was that everyone else accepted. But even then, I knew the band was magic.

“Songbird” was the first song I learned. I used to sing it to myself in my bedroom mirror with a hairbrush in my hand. On a family trip to Colorado, I hung back on hikes and played it on repeat in my head while imagining myself in a romantic montage with a boy from middle school. That was my first taste of Christine’s romanticism, and perhaps my first taste of romanticism at all. “I wish you all the love in the world, but most of all I wish it from myself” is a lyric so deeply loving that I recently begged my brother to let me sing that song at his wedding. But the friendliness of Christine’s vocal allowed 12-year-old me to connect to it just as powerfully.

Christine is melodically brilliant (can anyone not readily recall the tune to “Everywhere”?) and her voice is rich and soulful, with an expert stability, and pervasive sexiness. But what I love most about her is her accessibility, her willingness to make songs for everyone. If Stevie Nicks is a spiritual deep thinker like John Lennon, then Christine McVie is a Paul McCartney-like optimist. She has a pulsing excitement for the moment she’s in, a belief in miracles, and she appears to fall in lust constantly.

As a kid, this mirrored my passionate hope for the future, but as a young woman, it is her bravery that inspires me most. Sometimes I imagine her sitting down at the piano to play with her band (that included her bass player husband) “You Make Loving Fun,” a tune about her illicit affair with the group’s lighting director. When I write lyrics, my motto is if I’m embarrassed to put it in the song, I’m on the right track. In this pursuit, Christine is a guiding light—her loyalty to her art, and her paramount love for music, showing me the way.

My best friend and I went to see Fleetwood Mac at the Forum [in L.A.] a few years ago. Our seats were wedged into the stage right corner, and we spent the better half of the night pacing back and forth to the sections with better views until the security guards got wise to our plan. The band played hit after hit, but I went home thinking about Christine’s joy. And maybe that’s what first drew me to her as a lonely seventh grader: We shared a soulmate. For all her love songs, music appears to be the love of her life, at least she sings like it is. I didn’t know it then, but at 12 years old I was in the process of making the same lifelong commitment.

As I write this, “Say You Love Me” comes on and I hear it as if it’s brand new: the restrained confidence of her vocal, the enthusiastic piano at her fingertips, and the joyful honesty of her lyrics. Once again, I feel as if I’m with an old friend, pulled to the moment I’m in, and head over heels in love.

Rozzi is an L.A.-based singer/songwriter with new music to come in 2021.