Christine McVie On Her New Solo Collection ‘Songbird,’ Uncertain Future of Fleetwood Mac
Listen to her new version of the 1976 Fleetwood Mac classic “Songbird” where the original vocal track has been paired with a new string arrangement 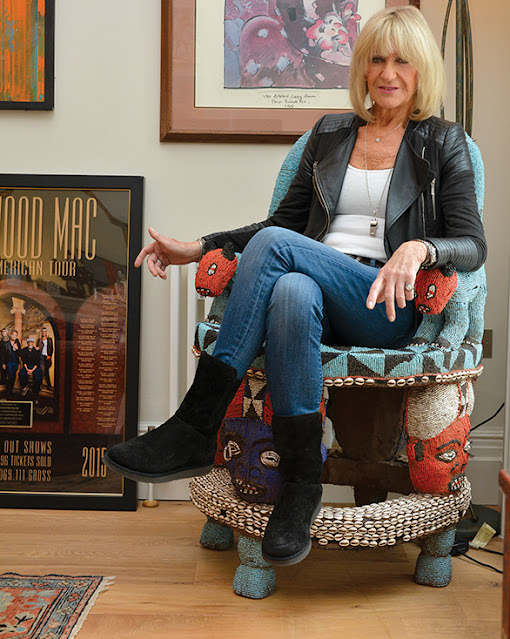 By ANDY GREENE
Rollingstone
Christine McVie has spent the vast majority of her professional career in Fleetwood Mac, but she did take a brief break in 1984 to record Christine McVie and followed it up 20 years later with In the Meantime. This solo material is largely unknown to the general public — especially in America — but she hopes to change that on June 24 with the release of Songbird (A Solo Collection). It’s a mixture of songs from her two solo albums plus a handful of unreleased songs, including “All You Gotta Do,” a duet with George Hawkins originally cut for In the Meantime.
Stevie Nicks and Lindsey Buckingham maintained active solo careers during their time in Fleetwood Mac, but McVie says she never really had that desire. “I’ve never felt like I was a solo artist,” McVie tells Rolling Stone from her London home. “I always liked to be part of a group. I also felt a little ill at ease doing a solo tour for that material. It just made me uneasy.”
For the new collection, McVie “went for my favorite songs that weren’t on Fleetwood Mac records,” working with producer Glyn Johns and redoing the tracks with extra instrumentation.
“The Challenge” from McVie’s self-titled 1984 album features backing vocals by Buckingham and guitar by Eric Clapton. “I clearly remember asking Eric to play on it,” McVie says. “And to my delight, he agreed. Like all of my songs, it’s about life and remorse and rejection.”
A majority of the Songbird (A Solo Collection) songs come from 2004’s In the Meantime. She released the album a few years after parting ways with Fleetwood Mac and retreating to her home in the English countryside. It peaked at #133 in the UK and didn’t even ding the U.S. charts. “I really like that record,” says McVie. “I think it wasn’t advertised as well as it could have been.”
The lone Fleetwood Mac song on the record is her 1976 ballad “Songbird,” and it’s a new rendition that pairs her original vocal track with a new string arrangement by composer and arranger Vince Mendoza. Check out the song right here:
Fleetwood Mac have been completely inactive since the conclusion of their 2018/19 world tour. It was their first outing since their bitter split with Buckingham, when he was replaced by Crowded House frontman Neil Finn and Tom Petty and the Heartbreakers guitarist Mike Campbell. “Those guys were great,” McVie says. “We have a great time with them, but we’ve kind of broke up now, so I hardly ever see them.”
“I don’t communicate with Stevie [Nicks] very much either,” she says. “When we were on the last tour, we did a lot. We always sat next to each other on the plane and we got on really well. But since the band broke up, I’ve not been speaking to her at all.”
Does she mean to say that Fleetwood Mac no longer exists? “Well, not as we know it,” McVie says. “I don’t know. It’s impossible to say. We might get back together, but I just couldn’t say for sure.”
Mick Fleetwood has been open about his hopes to see the Rumours-lineup come back together for a grand farewell tour, but McVie is highly dubious. “I don’t feel physically up for it,” she says. “I’m in quite bad health. I’ve got a chronic back problem which debilitates me. I stand up to play the piano, so I don’t know if I could actually physically do it. What’s that saying? The mind is willing, but the flesh is weak.”
In theory, McVie could sit at the keyboard to make it easier for her to get through a show, but she says that wouldn’t work in practice. “I couldn’t sit at the rig I play,” she says. “You have to stand up to play the piano and the Hammond Organ is beneath that, so it’s a bit difficult to think about sitting down and doing it. Anyway, I wouldn’t want to do that.”
According to McVie, bassist John McVie is in a similar predicament. “I don’t think John’s up for another tour,” she says. “He’s got health issues, so I don’t know if he would be up for it. You’d have to ask him.”
If a tour does somehow happen, McVie hopes that they’ll find a way to bring Buckingham back into the fold. “I’d always want Lindsey back,” she says. “He’s the best. Neil and Mike were such a cheerful couple, but Lindsey was missed.”
“But I’m getting a bit long in the teeth here,” she continues. “I’m quite happy being at home. I don’t know if I ever want to tour again. It’s bloody hard work.”
This may disappoint Fleetwood Mac’s legions of fans, not to mention some of her own bandmates, but they’ll be relieved to know she’s not closing the door on a tour completely. “I really can’t say for sure,” she says, “because I could be wrong. So I’ll just leave it open and say that we might.”
Nickslive at Friday, June 17, 2022
Share