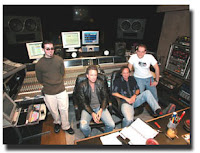 Imagine stepping out of recording school and having your first session be with Fleetwood Mac. That's exactly what happened to CRAS students John Haley and Phil Nichols. Haley and Nichols found saw their ship come in at Cornerstone Studios where they both were interning after graduating from the Conservatory.

"They were amazingly well-prepared, considering the situation we've thrown them into," remarked mix engineer Mark Needham, of Cake, Chris Isaak, and Elton John fame. "You've got 112 tracks of Pro Tools, a 48-track Sony 3348 digital machine, analog decks, and Neve automation all to lock up. They've handled every task I gave them, which is pretty sharp."

Student Phil Nichols comments. "I felt confident coming to work here in LA. The instructors made it clear exactly how it would be in the real world. They have the experience and want to make sure that you understand that and are prepared. In class, in sessions, in tutoring, the entire approach gives us a good foundation for working in the real world of recording music."

"The whole process of learning and coming up now is different than it was 20 years ago," explained Lindsey Buckingham "when rock and roll and the world around it were not as organized. There was a certain amount of luck, and I think you need the same amount of luck now, or even more. But there was also a certain amount of spontaneity that came from a lack of real understanding of what is correct and what isn't in the recording process. There is probably a good side and a bad side to having all of that harnessed, but I do admire the younger kids who are going in an learning a lot more, in a real sense of having a context of what it means to a broader understanding of music, and the techniques involved in recording music. I think that can only be a good thing. It certainly doesn't insure success anymore, though. It's just tough out there."

Haley offered the following advice: "Work harder than the guy who came before you. You are still proving yourself, so you have to have a really good work ethic. Be willing to put in lots of extra hours, all the time. You will be on the job as much as possible. Do your best to really help out."
Nickslive at Wednesday, May 23, 2007
Share