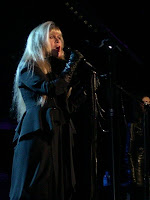 If Stevie Nicks could choose the perfect setting to perform her mystical passions of life and love, it very well may be the Greek Theater. Nestled amidst the sprawling greenery of Griffith Park in the Hollywood Hills, the venue played host to a crowd of nearly 6,000 Saturday night (5/19), the first of two sold-out nights in Los Angeles and only the second stop on the Fleetwood Mac frontwoman's current "Crystal Visions" solo tour.
Despite the 10-piece band that joined her onstage for the duration of the 14-song, 100-minute set, it may have been the towering trees that line the amphitheater that contributed the most color to the evenings proceedings, the softly-lit leaves rustling in the light spring breeze and offering an ambient backdrop to Nicks' retrospective night of classic rock and iconic pop.

"The real 'Crystal Vision' in my life is all of you, and I thank you for staying with me all these years. Now let's rockâ€¦" she casually said following the pulse of opener "Stand Back," offering her first of many chatty interludes. "Dreams" appropriately followed, one of the night's more buoyant pop excursions and also the track that features the title line of her newly released hits collection.

While more than half of the night's set could be found on the new "Crystal Visions" best-of set, the night wasn't all obvious hits, with fan favorite "Leather and Lace" absent and lesser-known piano ballad "Beauty and the Beast" serving as a grand and dramatic finale. With her long, blonde hair pulled up for the first time all night and classic black-and-white footage from Jean Cocteau's 1946 French film of the same name, "Le Belle Et La Bete," Nicks' closed the night with a song that explored the gray area within life's black and white extremes--a theme she had frequented throughout the performance.

Introducing "Sorcerer," which she recalled writing nearly 25 years ago, Nicks commented that the song captured both the "scary and fantastic" aspects of living in Los Angeles in the early '70s. Later in the set, she reminisced that "Fall From Grace" was both "the most loving and meanest song I've ever written."

The glue that held the set together was Nicks' vocals, her textured rasp adding imperfect yet inescapably comforting warmth, whether during the soft tenderness of her signature "Rhiannon," the middle-of-the-road country tone of "Enchanted," or the more animated hard-rock timbre of Led Zeppelin's "Rock and Roll."

While she didn't dust off the Tom Petty-penned "Stop Draggin' My Heart Around" from her solo debut ["Bella Donna," 1981], Nicks did dedicate a cover of his "I Need To Know" to her friend and recent tour mate, longtime guitarist Waddy Wachtel, who took advantage of some rare time in the spotlight.

Thigpen accompanied Nicks on the into to "Rhiannon," the vocalists played their part during the acoustic "Landslide," and Paxon and Castro soloed from "Still of the Night" into the intro to "Edge of Seventeen," which featured Wachtel riding his dominant riff throughout the song. As if by plan, though, they all blended rather reverently into the background, doing just enough to create a musical blanket for Nicks to wrap her vocals around.

That provided everything the enthralled crowd could have asked for, and sometimes more, as their "Gold Dust Woman" wove her musical incantations into the night. It was a night atypical of Hollywood's storied pomp and circumstance, and more fitting of Nicks' legacy as rock's reigning Queen. She delivered like royalty.


Setlist:
"Stand Back"
"Dreams"
"If Anyone Falls in Love"
"Rhiannon"
"Enchanted"
"Sorcerer"
"Gold Dust Woman"
"I Need To Know"
"Landslide"
"Fall From Grace"
"Still of the Night"
"Edge of Seventeen"
(encore)
"Rock and Roll"
"Beauty and the Beast"
Nickslive at Monday, May 21, 2007
Share