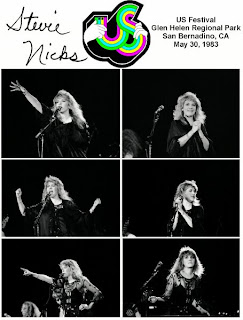 This Memorial Day weekend, one of the cornerstones of today's festival scene celebrates its silver anniversary. Flush with the first wave of personal computing fortunes, Apple's Steve Wozniak financed and played ringleader at two massive music festivals and technology expositions. The first took place over Labor Day weekend 1982 and included The Police, Gang of Four, The Ramones, The Cars, Tom Petty and the Heartbreakers, Fleetwood Mac and a breakfast set by The Grateful Dead. Anyone who'd missed the inaugural bash wanted in the next year, which would sadly be the last US Festival.

Each weekend was attended by several hundred thousand people (estimates vary wildly but agree at least 300,000 folks showed up to the second US Festival) but were crushing financial disasters. Wozniak lost an estimated $20 million combined for the two events. Still, for those who participated it was unbelievably special and remarkably peaceful. The sheer audacity of the scale of everything was overwhelming and delightful, a shared piece of history that one felt unfolding right in the moment.

Stevie's set that night consisted of an assortment of tunes from Fleetwood Mac along with new stuff that hadn't even been released yet, namely Stand Back.

Here's a link to download the first song she performed that night. Gold Dust Woman. AVI File size is 58mb.
Download
Nickslive at Saturday, May 24, 2008
Share