Stevie Nicks in Tampa on June 8 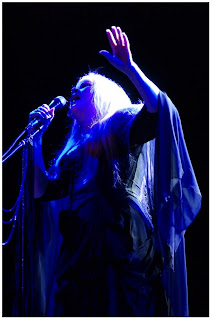 Famed for her mystical chanteuse image, Nicks enjoyed phenomenal success not only as a solo artist but also as a key member of Fleetwood Mac.

During her senior year in High School, Nicks met fellow student Lindsey Buckingham, with whom she formed the band Fritz. Between 1968 and 1971, the group became a popular attraction on the West Coast music scene, opening for Jimi Hendrix, Janis Joplin and Creedence Clearwater Revival

After moving to Los Angeles, the duo recorded their 1973 debut LP, Buckingham-Nicks. Despite a cover which featured the couple nude, the album flopped; however, it caught the attention of the members of Fleetwood Mac, who invited Buckingham and Nicks to join their ranks.

In quick time, the revitalized group achieved unparalled success: after the LP Fleetwood Mac topped the charts, they recorded Rumours, which sold over 17 million copies and stood for several years as the best-selling album of all-time.

Major hit singles like "Dreams" and "Rhiannon" made Nicks a focal point of Fleetwood Mac, and she took time off from the group to record her solo debut, Bella Donna, which hit Number One on the strength of the Top 20 hits "Stop Draggin' My Heart Around" (a duet with Tom Petty and the Heartbreakers), "Leather and Lace" (a duet with Don Henley) and "Edge of Seventeen (Just Like the White Winged Dove)." Over the following years to the present, Nicks continued to record with Fleetwood Mac as well as establishing a strong solo career.